Ballarat is likely to be the home of the athletics events at the 2026 Commonwealth Games, which are expected to be held in March to avoid significant clashes with the AFL season.

Mars Stadium in Ballarat, formerly known as Eureka Stadium, which has already been upgraded but would need to be further developed, has been discussed as the likely venue for the Games’ centrepiece track and field sports, according to sources with knowledge of the plans. 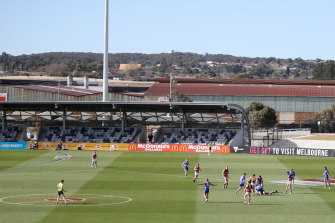 The athletics venue traditionally holds the largest crowd, is the hub around which other venues and sports are organised, and is normally the venue for the opening and closing ceremonies.

However, Ballarat mayor Daniel Moloney said Mars Stadium could not stage the opening and closing ceremonies, and that Geelong was the only regional city capable of putting on those shows.

Cr Moloney said when Ballarat hosted rowing at the 1956 Olympics, it inspired generations of local rowers to strive to compete at an international level, and the Commonwealth Games would bring similar benefits.

“That exposes young people to their international heroes,” he said. “It shows that if their city is worthy of an international event they can be on the global stage themselves.”

He added that Ballarat already hosted an elite road cycling event and could do so again at the Commonwealth Games, in addition to accommodating netball.

The MCG was the scene of one of the most memorable moments of the 2006 Games, when Melburnians lined the streets surrounding the packed stadium to see the late Kerryn McCann run for gold in the women’s marathon.

However, Victorian Premier Daniel Andrews made clear in announcing the bid that this will be a different event, held predominantly in regional areas.

The MCG would not, therefore, be repurposed for athletics as was the case when Melbourne hosted a mini-Olympics style of Commonwealth Games, a format which has now been abandoned, in 2006. 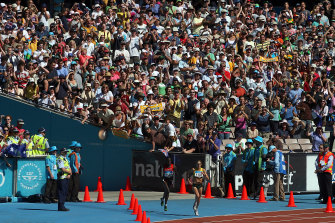 Kerryn McCann enters the MCG in 2006, on her way to victory in the women’s marathon.Credit:Sebastian Costanzo

Andrews did, however, point to the suitability of Mars Stadium as a venue for the athletics.

The Victorian government is also keen to use existing facilities where possible to minimise costs, and concentrate spending on additional supporting infrastructure.

“Some regional communities are self-starters in terms of they have already got strengths. So whether its netball and basketball in Bendigo, perhaps some of the aquatic stuff down Geelong way and I could mention many others,” Mr Andrews said.

“There are some strengths and there are some first class facilities that are already there. Athletics for instance at the upgraded – but probably need to be further upgraded – Mars Stadium in Ballarat.

“We have made significant investments everywhere from Mars Stadium in Ballarat all the way through to GMHBA stadium in Geelong.”

Mars Stadium has a capacity of 11,000, with plans already announced for further upgrades and improvements for an athletics track.

The regional focus means the Games would not impinge on venues during the AFL season, barring the fact the Western Bulldogs presently play two games a season in Ballarat.

Sources said it was unlikely that the Commonwealth Games would seek to go head-to-head with the launch of the AFL season. This year the season starts on March 16.

Given the confidential nature of the negotiations with Commonwealth Games Australia and the Commonwealth Games Federation, and the fact that many details are yet to finalised, the Victorian government has yet to enter officials discussions with AFL on the impact of the Games on the state’s biggest sport.