Great Britain’s 4×100 metre relay team face being stripped of their Olympic silver medals after CJ Ujah, the lead-off man in the team who were dramatically beaten by Italy in Tokyo, was suspended for an alleged anti-doping breach.

In a potentially devastating blow to Team GB’s reputation, Ujah is alleged by the Athletics Integrity Unit to have tested positive during the Games for S-23 – selective androgen receptor modulators (SARMs), which aids muscle building, and ostarine, an anabolic agent. 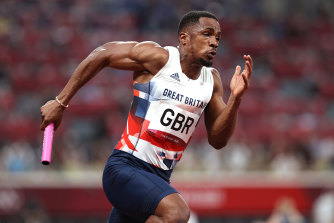 Ujah, 27, was part of the British team with Zharnel Hughes, Richard Kilty and Nethaneel Mitchell-Blake who were beaten to gold by just 0.01 seconds by Italy in last Friday’s sprint relay final in the Tokyo Olympic Stadium.

Under the heading “Chijindu Ujah (GBR), 4x100m”, a statement by the Athletics Integrity Unit simply says, “presence/use of a -prohibited substance (Ostarine and S-23).”

Ujah, who is Britain’s reigning national 100m champion, was also part of the Great Britain team who won gold in the 4x100m world championships in 2017 at the London Olympic Stadium and is a former European junior champion.

Ujah has been handed a provisional suspension, pending an investigation, after the AIU announced that disciplinary proceedings had been launched against four track and field athletes at the Olympics.

Sadik Mikhou, a 1500m runner from Bahrain, Benik Abramyan, a Georgian shot-putter, and Kenyan sprinter Mark Otieno Odhiambo have also been suspended from competition. CJ Ujah was the only medal winner among those who were named on Thursday by the Athletics Integrity Unit.

Target testing was specifically carried out on two of the four athletes and the AIU will now await the conclusion of the ITA’s proceedings before determining whether any anti-doping rule violation has been committed and what sanctions should be imposed in respect of the Olympics. 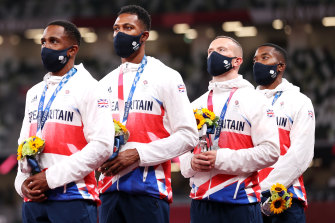 The AIU said: “Any consequences beyond the Olympic Games to be imposed upon the athletes under the World Athletics Anti-Doping Rules will be determined following the conclusion of the ITA proceedings.”

British Athletics said that it did not comment on live cases or ongoing anti-doping processes.

Canada and China, who respectively finished third and fourth, could move up to silver and bronze if the suspension is upheld and Team GB are stripped of their silver medal.

That would also take Team GB’s final medal tally to 62, one below London, and cast a huge shadow over what had been hailed as the Miracle of Tokyo and the nation’s greatest ever Olympic performance.

After receiving their silver medals, Ujah had retweeted a message from Eurosport which read: “You’ve earned this moment – enjoy every second, guys!”

The AIU is the independent body created by the World Athletics that manages all integrity issues, both doping and non-doping.

Its remit includes anti-doping, the pursuit of individuals engaged in age or competition results manipulation, investigating fraudulent behaviour with regards to transfers of allegiance, and detecting other misconduct including bribery and breaches of betting rules.

Olympic athlete found dead at home – and husband is suspect