Australia will field a “normal-sized” athletics team of about 70 for the postponed Olympics, despite the impact of lockdown and the massive disruption to training and competitions around the world.

Wednesday marks 100 days until the opening ceremony of the long-awaited games that will be staged in front of a Japanese only audience due to the COVID pandemic. 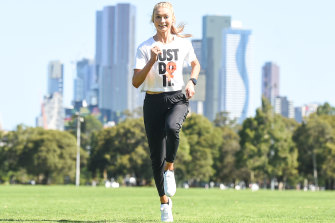 Jessica Hull is already qualified in the 1500 and 5000m for the postponed Tokyo Olympic Games.Credit:Justin McManus

Australia already has 30 athletes – 18 women and 12 men – who have qualified for the Olympics, with more likely to be confirmed after the national championships and Olympic trials in Sydney this weekend.

Athletes without a qualifying standard but in the top-ranked athletes in the world for the year will also be eligible, meaning Australia should have about 60 athletes qualified, not including the relay teams according to Athletics Australia’s high performance head.

Many countries around the world have had disrupted seasons – Kenya, for instance, which is always strong in middle and long distance running has had no competitions – so it is uncertain yet what the impact will be on the number of athletes globally who will be qualified and or attend due to the impact of COVID-19 in their countries.

Australia’s general manager of high performance Andrew Faichney said he still expects full fields in all events and was not aware of countries choosing to not attend the games.

“At the moment we have 30 athletes that have qualified by entry standard but I hope there are a few more that might get that over the national championships and ignoring the relay team we have around another 30 that are in the field sizes also,” Faichney said. 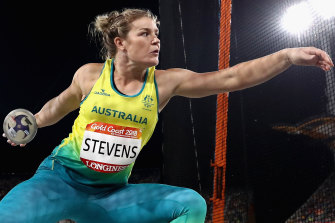 Dani Stevens has already booked her place on the Australian Olympic team in the discus.Credit:Getty Images

“We are looking at around 60, and if our two relays that are qualified hang on it will be closer to 70.

Australia has withdrawn from the world relays in Poland this month for health reasons, due to the high COVID infection rate in Europe, and will instead host an Oceania relay carnival in Queensland.

It is hoped that Oceania carnival will not only give the two qualified women’s teams a chance to improve their times but also open up a chance for the promising men’s 4x100m team that has Rohan Browning and Jack Hale running to be able to confirm a place.

“Oceania will be a great three weeks of competition and that will be the last period of competition, not only for our relay athletes, but also anyone that may still be chasing an entry standard or ranking points.”

Athletes who were qualified for Tokyo last year prior to the decision to postpone the games didn’t have to requalify again this year.

“When they announced the postponement of the Tokyo Olympics they paused the qualifying period and then it reopened on 1st December 2020,” Faichney said.

“So all of those Diamond Leagues last year where Stewy (McSweyn) and Jess (Hull) ran really well and Nicola (McDermott) jumped well, they all were not included in the qualification period.

“But all of those qualifying performances before the postponement are still valid. Dani Stevens for instance did her qualification pre-Christmas 2019.”

Australia plan to have an athletics camp in Cairns pre-Olympics from July 10 and then fly into Tokyo in two waves.

While theoretically athletes with an Olympic standard qualifying performance need to win at the national titles for an automatic selection to the Australian team, any athlete who records a qualifying performance has typically always been taken to the Olympics, unless there were more people qualified for an event than places available on the team as has happened before in the marathons.

“That’s the intent of our policy now – take anyone qualified,” Faichney said.