Home » Athletics » ‘I’m not who you think I am’: Mo Farah trafficked to UK under false name

London: Four-time Olympic champion Mo Farah has disclosed he was brought into Britain illegally from Djibouti under the name of another child.

“The truth is I’m not who you think I am,” the 39-year-old Farah told the BBC in a documentary called The Real Mo Farah. 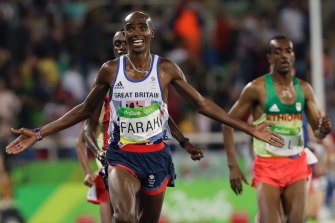 Farah, who became the first British track and field athlete to win four Olympic golds, said his children have motivated him to be truthful about his past.

“The real story is I was born in Somaliland, north of Somalia, as Hussein Abdi Kahin,” he told the BBC. “Despite what I’ve said in the past, my parents never lived in the UK.

“When I was four my dad was killed in the civil war, you know as a family we were torn apart. I was separated from my mother, and I was brought into the UK illegally under the name of another child called Mohamed Farah.”

During the documentary, Farah said he thought he was going to Europe to live with relatives and recalled going through a British passport check under the guise of Mohamed at the age of nine after travelling with a woman he didn’t previously know. 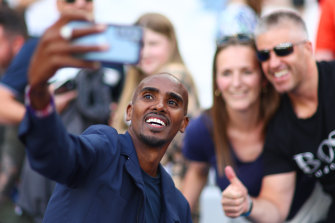 Farah poses with fans during a charity football match in England last month.Credit:Getty

“I had all the contact details for my relative and once we got to her house, the lady took it off me and right in front of me ripped them up and put it in the bin and at that moment I knew I was in trouble,” he said.

The athlete travelled back to his childhood home in west London, recalling “not great memories” where he was not treated as part of the family.

Farah eventually told teacher Alan Watkinson the truth and moved to live with his friend’s mum who took care of him. He ended up staying for seven years.

The teacher, best man at Farah’s wedding, told the program: “It’s only recently that I’ve thought about it and questioned whether actually I did anything wrong in this scenario. But I don’t think either I or the school did anything wrong.”

It was Watkinson who applied for Farah’s British citizenship which he described as a “long process.” Farah was recognised as a British citizen in 2000 and said in the program he named his son Hussein in honour of his roots.

The UK’s Home Office guidance assumes that a child is not complicit in gaining citizenship by deception. “No action whatsoever will be taken against Sir Mo,” a spokesman told London’s Daily Telegraph.

Refugee denied national title, but not giving up Tokyo dream

The 10-second barrier: Browning’s back for another crack