Kelsey-Lee Barber could be Australia’s greatest clutch performer. For the third time at a major championship, she has won a medal with her last javelin throw.

This time – as she did in Doha to win her first world championship – her last throw won her Commonwealth Games gold. At the Olympics in Tokyo last year, her last throw lifted her to bronze. 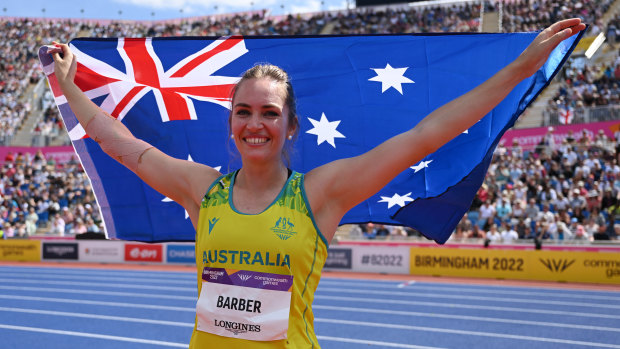 “I didn’t think about the fact I have done it, before but more about the fact it is one more opportunity. The comp is not over until I have this throw,” Barber said.

“I am not going to lie, it is nice to know I have the confidence I can keep lifting through a competition and I can find something in that last round.

“It’s a nice card to have going into competitions, it keeps the competition alive.”

Barber’s win on Sunday came just a week after she was diagnosed with COVID-19, suffering mild symptoms. She was still testing positive late in the week, but was clear to compete. 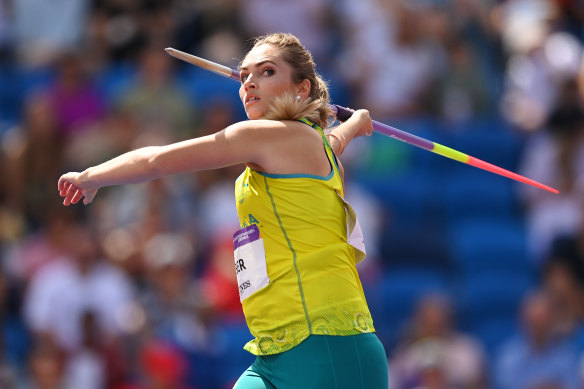 Barber won just a week after she was diagnosed with COVID-19.Credit:David Ramos

After winning her second successive world championship gold only a fortnight ago, Barber declared she wanted to go down as one of the greats of the sport. Performances like this only enhance that reputation.

Commonwealth gold was one that had eluded her, she said.

“This is a really lovely story,” she said. “I had the bronze and I had the silver and the gold was always the goal, so to come away and achieve it today I am really pleased.”

Barber’s stunning last throw of 64.43m overshadowed the fact that the woman she overtook for gold was fellow Australian Mackenzie Little. 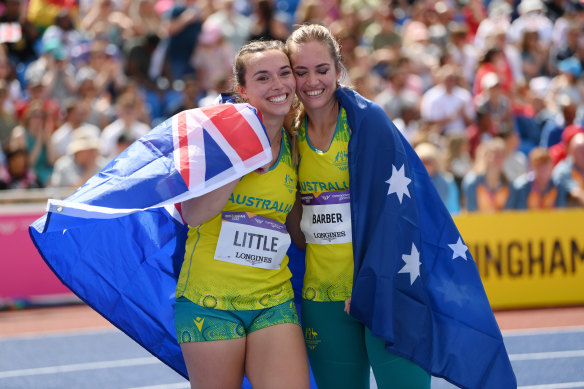 Little will be wondering what more she needs to do. Twice she threw personal bests. The first came after Barber had set down the mark for the field with the first throw 63.52. Little had never thrown that far in her life.

When the moment demanded it, Little went big. She threw 64.03m with her first attempt and jumped into the gold medal place. She threw even bigger with her fifth at 64.27m, laying down the challenge to Barber.

But as Barber overtook her, she could only stand and applaud a champion.

Little has been here before. At the world championships a fortnight ago, she was sitting in the medal positions until being squeezed out to fifth in the last round. Here, she threw bigger again and won silver. 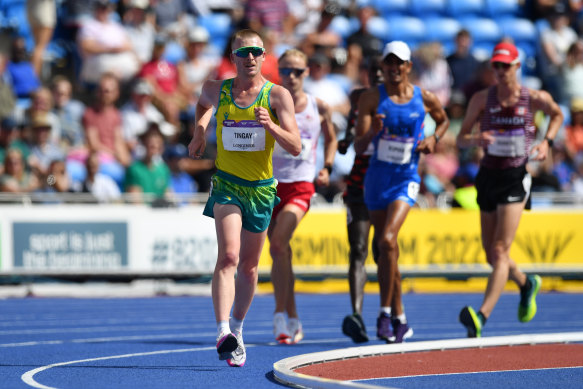 Meanwhile, on the track, Declan Tingay won silver in the men’s 10km race walk, unable to sustain his pace when the gold medallist, Evan Dunfee of Canada, broke in the last lap and pushed hard, opening up his gait and getting the judges twitchy with their yellow paddles.

Dunfee glanced at the judges with 100 metres to go and raised his arms in the air when he realised he wasn’t going to be penalised. He won in 38:36.37.

“I knew it was happening. In some ways, it’s inevitable. When Evan wants a medal, he’s going to get it. I don’t think I’m at the stage in my career where I can hold off a walker like that.”

Asked if he had any concerns about Dunfee’s technique on the final lap, Tingay replied “absolutely not”.

“If I’m going to get beaten by anyone, I’m happy it’s Evan,” he said. “You are going to attract more attention from the judges when you kick away like that. In some ways, it’s a gamble you take. You pit your technique against the judges and, honestly, that’s the half the event.”

At any other Commonwealth Games, hurdler Michelle Jenneke would have won a medal – probably gold. These games, she was drawn next to the world record holder, who smashed the games record.

Nigerian Tobi Amusan ran 12.3s over the 100 metres, eclipsing the previous record of 12.65s. When you consider Jenneke ran 12.68s, you might think she’d take a medal –but she ran fifth.

“That is like by far the fastest race that has ever been at a Commonwealth Games. The previous games record was 12.65 and that was just absolutely obliterated, so it’s like fifth at the Commonwealth Games probably doesn’t sound that impressive,” Jenneke said. 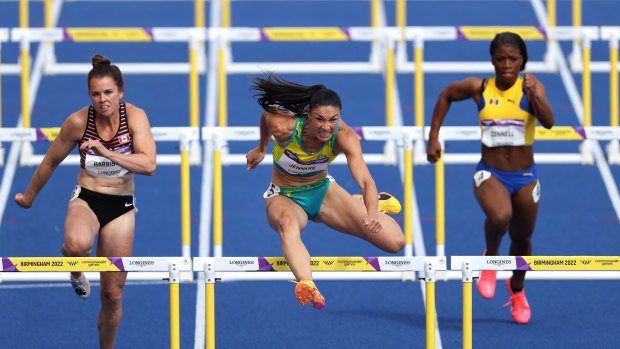 “But in that field, I tell you what, it really is because that was red-hot, all the girls are absolutely incredible.

“That would have won or come second at most games, but it shows the depth of the field here. I much prefer that, it’s always nice to come away with a medal, but to be out here performing at my best, I’m really happy with it.

“I felt like in warm-up I was probably capable of a little bit more today, but I am really happy.”

Jenneke said that being drawn next to the Amusan – as she was in the semi – did not spook her, rather it helped push her along.