Stewart McSweyn is aiming to follow in Cathy Freeman’s footsteps.

McSweyn, the national middle distance star and Olympic hope, is heading to Stawell in western Victoria on Monday and despite giving the rest of the field up to a full lap head start, he hopes to chase down victory in the two-mile event. 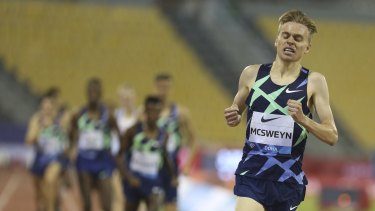 Stewart McSweyn wins the 1500m in the Diamond League meeting at Doha in September last year.Credit:AP

In 1995, as she was launching herself on the world stage, Freeman went to Stawell and delivered a performance that took the breath away.

Running from scratch in a 400m race she gave the other runners up to a 54m head start. She got them by the top of the home straight.

The next year, in foul conditions, she went back and did it again.

The videos of those events went viral and enhanced the aura around Freeman as she raced towards the Olympics in 1996 and then, famously, to Olympic gold in the 400m at the Sydney Games.

His coach, Nic Bideau was Freeman’s coach in that period and has set his King Island star a similar task to Freeman to draw out the competitive beast in him on the grass in Stawell. 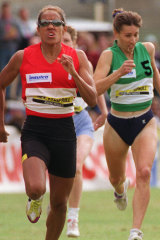 To win, he has to not only overcome the handicappers but an impressive field that also boasts Matthew Ramsden, Brett Robinson, Dave McNeill, Jack Rayner, Ryan Gregson and Jordan Williamsz.

“It’s a really good field so I am going to have my hands full and will have to go full throttle to catch them,” McSweyn said.

“When you watch at home, handicapped races might look easy but you just focus on passing the next runner and the next and it’s hard getting over the last ones.

“It will be fun. I am rapt I saw video of Cathy Freeman’s race just this morning. You see she gets a bump and goes again.

“It’s exciting to have a crack at it. Stawell is just such a famous, great event. I am excited to be able to race here.”