Abdoulie “Buster” Asim, a refugee from Gambia who lived under a Sydney bridge for a week and ate discarded McDonald’s meals pulled from bins, has been cruelly denied the Australian 200 metre sprint title.

But he still holds hopes of realising his dream: running at the Tokyo Olympics. 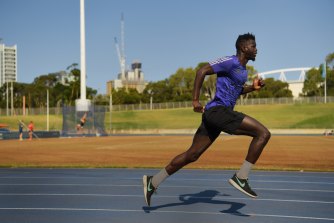 Asim came to Australia with the Gambia team for the 2018 Commonwealth Games and stayed, fearing for his life from his own family if he returned to his country due to his religion. He is a Christian.

He was given refugee status here and on Sunday, crossed the line first in the men’s 200 metres at the national athletics championships. But he was later disqualified for stepping outside of his lane. He hopes to yet run a legal qualifying time and make it to the Tokyo Olympics.

If he does make it to Tokyo, he will not be able to realise his true dream, which is to run for Australia. Not yet an Australian citizen, he would have to run under the IOC’s international flag.

“It means a lot to me because the most reason to me to stay in Australia was to continue my career and [I] just want to run for Australia,” Asim said after winning the race, and before being told he had been disqualified.

“That’s my dream, to run for Australia [at the Olympics]. That is my main dream.”

The disqualification was yet another painful step for the athlete who was forced to sleep rough after coming to Sydney, trying to find a coach and pursue his dream.

“The first time I come to Australia was pretty hard because I don’t know anything about Australia,” Asim said.

“When I stayed here even to sleep it was a problem to me because I didn’t want to have a nightmare.

He said he slept under a bridge for almost a week before he got help and was taken to Hope Hostel in Parramatta (“nice people over there”). He stayed there for almost a year before moving out to his own place.

Wanting to find an athletics coach, Asim headed to the biggest track in Sydney where he was told the name of someone who could help him. He waited at a bus stop for two days, fearing he might miss the man.

He eventually got to the Olympic stadium and was pointed in the direction of John Quinn, the former GWS and Essendon conditioning coach and now sprint coach.

“He didn’t leave the bus stop for two days … eventually he had to because he was starving. It didn’t take long for the money to run out – he was getting food out of the bins and begging people for money and he discovered that at McDonald’s, kids often go there and leave their leftovers so he was living on leftover McDonald’s for quite a while,” Quinn said.

“His accommodation was under the bridge in Parramatta with the homeless and the destitute where he had to fight for his space.

“Somehow he found his way to the track and found me and he has been in my squad now for over two years. He is just a fantastic person to coach, he is very strong in spirit, humble. He is going to make great coach himself one day.”

Asim went with Quinn to Tasmania to race in the Burnie Gift, and won. He earned a winner’s cheque of $12,500 and began immediately giving all of his training partners $500 each.

Quinn told him not to give his money away.

“He said to me ‘hey coach, you can’t tell me what to do, we are all in this together, this is what athletics is – you help me, I help you’. So I have learnt a very valuable lesson from my athlete,” Quinn said.

“Seeing him succeed like that on that stage today is a great step forward for him.”