Not much more than a month ago Austin Rivers was wondering if he would ever play NBA basketball again.

The 28-year-old was waived by Oklahoma City Thunder after being traded at the NBA’s trade deadline from the New York Knicks as part of a three-team deal.

After sitting at home for a month-and-a-half, finally the phone rang. It was the Denver Nuggets and they offered him the chance to suit up and take to an NBA floor once again.

And despite a 36-point double-double from lively MVP-in-waiting Nikola Jokic on Thursday night, there are no doubts: this game was more about Austin Rivers.

Sport always loves a redemption story and Rivers delivered exactly that as his blistering fourth-quarter display helped the Denver Nuggets past the Portland Trail Blazers, 120-115 at Moda Center, to nudge the Colorado ballclub 2-1 ahead in their Western Conference playoff series.

Rivers finished with 21 points, with five from beyond the arc on the night, including a string of threes in a 16-point fourth quarter which saw the Nuggets bench react with increasing gusto as he bulleted shots from range down the stretch.

The 10th pick in the 2012 NBA draft, out of Duke, was the key contributor in the final frame of Game 3, but he admitted to reporters after that he was left wondering if moments like this would ever come again just a matter of weeks ago.

“I sat there for like a month and a half, waiting on the phone to ring. I just put my faith in God, having conversations with myself, talking to God like, ‘What’s the plan? What’s going to happen?'” Rivers said.

“All the feedback I kept getting is, a lot of teams liked me but they didn’t know what type of character I was and how I’d be in their locker room. My basketball ability was never questioned; it was who I was as a person. Which is actually even worse.

“Truthfully, it broke my heart. Because I know who I am, and I’ve always had good relationships with people, but you can have one instance with mistakes and be labeled something.”

As the son of Philadelphia 76ers coach Doc Rivers, Austin has always been in the public eye from the start of his basketball career. He was drafted 10th overall in 2012 by the New Orleans Pelicans and moved to play under his father in 2015 at the Los Angeles Clippers. In 2018, he was traded to the Wizards, then dealt to the Suns and waived, before signing with the Houston Rockets. He signed with the Knicks before this season, appearing in 21 games before being traded. 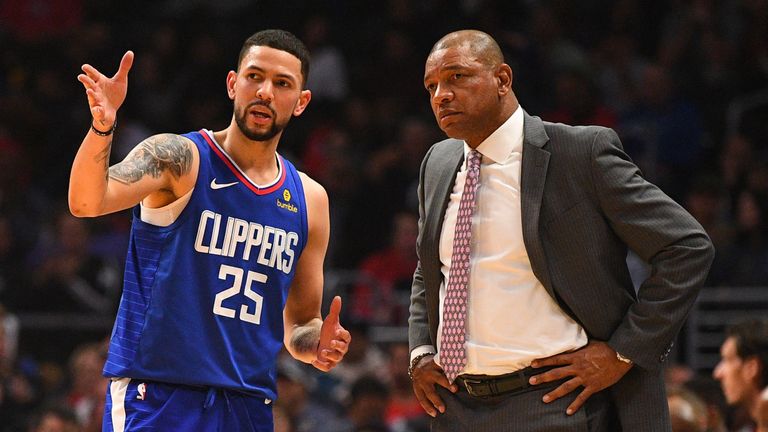 Rivers, who has averaged 9.1 points and 2.3 assists over 579 career games, didn’t expand on what the incident he was hinting at in his post-match remarks was, but the candour with which he spoke to reporters made it apparent that he has found his recent experiences challenging mentally.

And Thursday night’s breakout acted as a form of catharsis.

“This game can bring you to the lowest feeling in the world. I swear, some nights you can feel so low,” Rivers said. “And then this game can make you feel so good about yourself, too. It’s a beautiful game.”

16 points in the fourth.

The Denver locker room, en masse, was delighted for their recent recruit, who was signed permanently at the end of April after joining on a 10-day contract following Jamal Murray’s torn ACL injury.

“Couldn’t be happier for the kid,” coach Michael Malone said. “I just told our team, think about this – guy was sitting at home for 2½ months waiting for his phone to ring. And it wasn’t ringing. That to me is crazy to even think about. Austin Rivers is a good player. He’s played in 45 playoff games prior to this season, and it just worked out for him and us that he’s here.”

“He was on fire,” Nuggets guard Facundo Campazzo said. “He was great all game, but especially the fourth quarter. That is very important for us. We are not going to win this game without him.”

“He made clutch threes,” Trail Blazers coach Terry Stotts said after the game. “The game was going, it was close. He made one when, I don’t know if both of them, but the shot clock was running down, so obviously those were big shots in the fourth quarter.”

Denver also is currently without guards Monte Morris and Will Barton due to hamstring injuries. Both are expected to return this season but if Rivers can have a few more games like this one, then that will obviously be a massive boost to their chances of contending for the NBA title.

And if they do go on to actually win it all, then ‘the Austin Rivers game’ will go down as the stuff of legend in the NBA annals forevermore.

Predicting the East finals: Best player, better coach and who will win?