The Matthew Dellavedova you have seen playing sporadically off NBA benches in recent years is not the player you will see in the NBL this season.

The delayed start to the Australian season seems to have dulled expectations around the 31-year-old despite him having a long preseason to regenerate his body and turn his mind to being a feature player instead of a role player.

Despite Dellavedova being the NBL’s highest-profile player this season, some commentators aren’t expecting big statistics but rather the gritty, defensive performances we’ve seen throughout his NBA career.

The injuries and disruptions in his last 18 months in the NBA have no doubt informed those views as well but watching a refreshed Dellavedova train and play with United paints a very different picture.

Dellavedova feels like he is ready for a leading role.

“They are definitely encouraging me to do that [score] and it’s a mentality that I’ve got to have,” Dellavedova told The Age and Sydney Morning Herald.

“I have to keep being aggressive and when passing lanes opening up I can do that as well. I feel like I have got better since being here finishing around the rim and making different one on one moves – I’ve enjoyed it.” 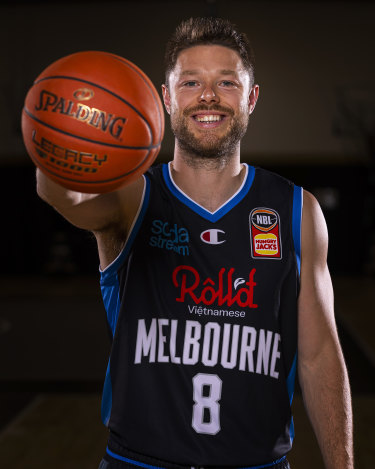 With New Zealand point guard Shea Ili hounding him, Dellavedova is regularly scoring buckets or setting up his teammates during training while United coach Dean Vickerman described his performance at both ends as match-winning in their NBL Blitz victory over Illawarra.

Vickerman wants “Delly” scoring 16 plus points a game and adding plenty of assists and with skipper Chris Goulding out for Sunday’s opening-round clash with fellow title contenders Sydney Kings, that scoring will be even more important.

For that to happen, Dellavedova will need to make his three-point shots consistently and it has been a focus during preseason training after his percentages fell in recent NBA seasons as his minutes became less consistent.

“We spent some time with video and looked at his shot over time, we talked about how injury changed his shot a little bit,” Vickerman said.

“It was just for me, what are the things I can say to keep him confident when a shot goes short or goes long but I think our medical staff has done a great job with him in making him feel confident to get his legs back into his shot and that builds consistency.”

Dellavedova is confident his shooting will further improve as he builds up his game time.

“Having a lot of reps and playing a lot at training whether it is one on one, two on two or five on five has put me in a good spot,” Dellavedova said.

“I feel like I will only get better during the season as I get more game reps and know where shots are coming from, knowing that I’m going to have the opportunity to play minutes and have the ball in my hands – I’m going to need to score and to shoot with confidence.”

United won the championship last season but lost some vital players such as centre Jock Landale to the NBA and point guard Mitch McCarron to Adelaide.

Goulding pointed out Dellavedova progressed too far into the team’s offensive plays early in preseason so they had to slow him down to help new players learn the basics.

“Delly will know every offence inside and out, when I came back to practice we were already running wrinkles [variations] in our offence and that wasn’t helping the new guys who were still learning the foundations,” Goulding said.

“Delly being the basketball brainiac that he is has been great for someone like me but we had to pull things back and work on our fundamentals.”

That moment was educational for Dellavedova who had embraced the open communication channels between veterans like himself, Goulding, David Barlow and Vickerman.

“All five guys on court need to know what you are doing,” Dellavedova said.

“We are doing a good job building the basics first. Those wrinkles or change ups come when you see how teams are guarding you then they become a play call halfway through the season.”

Dellavedova will be the face of the league this season, much like Andrew Bogut during his two-season stint with the Sydney Kings, and Dellavedova still aims to work his way back to the NBA.

He doesn’t have any complaints about being in the spotlight but his focus has remained on how to best perform in the NBL and how to make his wife Anna and pre-school aged son Anders comfortable in their new city.

Perhaps those thousands of hours in NBA watching superstars LeBron James or Giannis Antetokounmpo answer question after question and be pulled in every direction has given the guard a different perspective on the brightness of the spotlight in Australia.

“I’ve been pretty busy with just getting things set up and things like that,” Dellavedova said.

“My main job is obviously playing basketball, making sure I’m ready to go and knowing what I have to do on the court but I definitely want to help grow the league and basketball in Australia and United as well.

“My goal is to try to get back into the NBA but I just what I do what I can to help United win games because if I’m doing that everything else will take care of itself.”

Sports news, results and expert commentary. Sign up for our Sport newsletter

NBA 2020 season restart: These players are expected to opt out of participating