The Australian Boomers could face a tricky start at the Tokyo Olympics while the Australian Opals have come out with a favourable group after FIBA hosted its Olympic draw on Tuesday night.

The Boomers were drawn into group B, avoiding Team USA and Spain, but they could end up facing long-time rivals Serbia should they win their Olympic qualifying tournament, which is due to be hosted in Belgrade, Serbia in late June. 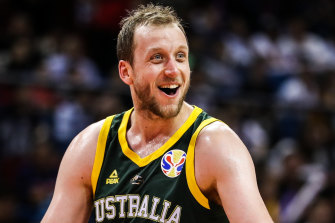 Joe Ingles and the Boomers could face tough rivals Serbia in their group at the Olympics.Credit:Getty Images

The Boomers will face Nigeria and two qualifier teams in group B, which will create some scouting difficulties as those two qualifying tournaments aren’t scheduled until just weeks before the Olympics.

Serbia will host the Dominican Republic, Italy, New Zealand, Puerto Rico and Senegal in its qualifying tournament with the overall winner going to Tokyo. Split, Croatia will host the other qualifying spot in the Boomers’ group and Croatia, Brazil, Germany, Mexico, Russia and Tunisia will face off there for one Olympic berth.

If Spain and Croatia progress to Tokyo the Boomers will face two very difficult group games while Nigeria has been actively recruiting NBA players of Nigerian descent in recent years to bolster their roster.

Boomers coach Brian Goorjian said he looked forward to finding out who would win the two qualifier spots.

“A successful Olympics campaign is all about preparation both on and off the court, getting our style of play and selection spot on, and delivering when it matters,” Goorjian said.

“This tilt at gold in Tokyo has been a decade or more in the making and I’m excited by the opportunity that awaits us later this year.”

The Opals have avoided medal fancies Team USA, France and Spain who all shape as contenders in Tokyo.

Instead, the Opals will face rising power Belgium, China and Puerto Rico in group C of the three-group competition.

France beat the Opals during their FIBA Olympic qualifying tournament in France last year while the Opals also had a comfortable win over Puerto Rico in the same event.

Opals coach Sandy Brondello said her side would focus on being its best for the Olympics.

“This Opals playing group are going to Tokyo wanting to win Australia’s first ever women’s basketball gold medal at an Olympic Games and we have the talent to do it,” Brondello said.

“We know our effort and execution needs to match our ambition and we look forward to making Australia proud in Tokyo.”

Both the men’s and women’s Olympic tournaments will use a different competition system in Tokyo with the top-two in each of the three groups plus the two best third-place sides making the knockout quarterfinals.

This means the teams who make the gold medal games will only play six games instead of eight under the previous system.