When Chinese centre Zhou Qi first took the court in the NBL, some observers wondered if teams could score near the basket while his 215-centimetre frame was in the paint.

But his foul trouble, and some brave attacks at the basket from the NZ Breakers, showed on Friday night that it was possible to score against the one-time Houston Rockets big man. Yet as Andrew Bogut and others have shown in the past, a big centre doesn’t get any smaller as the game goes on. 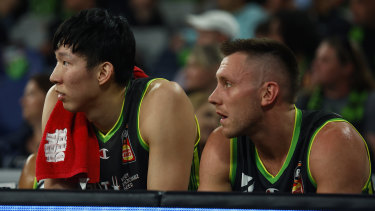 Zhou (whose name is pronounced ‘Joe Chi’) has a simple perspective on how he wants to guard the basket, and he will be looking to lock down the keyway when his Phoenix attempt to win their third-straight game when they take on Melbourne United at John Cain Arena on Sunday.

“Protecting the rim is one of the most important roles for me on the team, and I will always do the best I can,” Zhou said via his interpreter.

Phoenix star Mitch Creek has fast formed a friendship with his fellow former NBA player, and he praised Zhou’s smarts and persistence on Friday when he withstood three early fouls and having the Breakers score against him in the first three quarters to stand up in the final term as Creek led the Phoenix to victory with a career-high 36 points.

“I wasn’t expecting we could get along so well in such a short period of time.”

“I know they made a lot of shots on him [tonight], but he deters players and makes it hard for the offensive players, they might make them early, but we know the percentages are in our favour as the game goes on,” Creek told ESPN post-game.

Zhou admits he wasn’t sure how well he would mesh with his teammates, especially after missing the early part of preseason and spending time away with his national team heading into last week’s opening game.

“I get along with the boys pretty well and it’s better than I thought before I came here,” Zhou said via his interpreter.

“It’s a completely new environment and new teammates. Everyone is very friendly, but I wasn’t expecting we could get along so well in such a short period of time.”

Zhou said before the season that he would be fine communicating with his teammates on-court, and his issues were more dealing with everyday interactions off the court.

Phoenix coach Simon Mitchell had only praise for Zhou’s fit and his “cheeky” demeanour around his teammates.

He added that the centre’s English skills were better than he was letting on when it comes to chatting to his teammates. 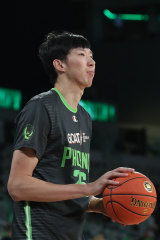 Zhou Qi warms up prior to the round two NBL game between South East Melbourne Phoenix and New Zealand Breakers at John Cain Arena.Credit:Getty Images

“He’s sneaky mate – don’t buy into that ‘I don’t understand the language’ stuff, he is across everything,” Mitchell said with a laugh.

“He’s real cheeky. The other week he was walking past the physio, who was working on his computer, and he shut his computer as he walked past – things like that bring a bit of laugher to the group.

“Him and Creeky have really hit it off – he’s just got a real playfulness and I see that from a coaching standpoint, I’m sure the players see that even more.

“He is a high-intellect kid, he’s good to talk to and hr understands communication one on one. It’s when there is more than one voice that he needs some help.”

The Phoenix’s clash with United game shapes as an important one as United won’t want to drop to 0-2 and the Phoenix know they will have to beat their crosstown rivals to get themselves into the championship discussion.

Zhou wants to establish his presence more at the offensive end, and with each passing contest his understanding with his teammates improves.

“It’s my first time in Australia and first time with these boys, but we are learning to play with each other,” Zhou said.

In the final quarter on Friday night, Zhou rolled to the basket and dunked a pitch-perfect lob from import guard Xavier Munford over Breakers big man Yanni Wetzell.

If the Phoenix can unlock more plays like that, their big centre’s presence will loom even larger.

Star’s mother ‘loved’ being hit on by Shaq