Home » Basketball » ‘It’s been a long time coming’: Josh Green making the most of his Boomers debut

Josh Green left Sydney to chase his basketball dreams in the US but his heart has always been set on playing for Australia.

Yet each time he tried to wear green and gold, something stood in the way. 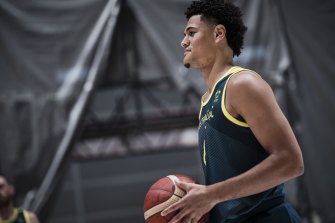 First, he couldn’t join up with the Australian under-age sides and, when called up to play for the Boomers in a FIBA World Cup qualifier, a serious shoulder injury kept him in the US.

Still, Green is tenacious when it comes to basketball and that attitude, along with his commitment to defence and playing his role, saw him drafted to the NBA where he completed his rookie season with Dallas Mavericks in June.

The Boomers came calling again and this time nothing has stopped him as he joined training camp in Los Angeles and won a coveted place in the final 12 for the Tokyo Olympics.

“I had a chance to play in the World Cup qualifiers for Australia but then I tore my shoulder so I missed that,” Green said.

“It’s been a long time coming.” 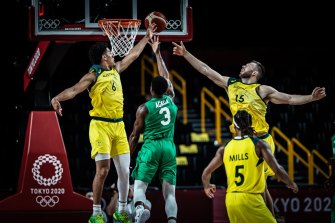 His mum Cahla was in tears when he called with the news he would become an Olympian. Both his mum and his dad Delmas were accomplished basketballers.

“It’s always been a huge goal of mine, to wear the green and gold,” Green said.

“This is the first time I have ever got to wear it.

“It was really cool to be able to share that with my family, my mum was crying. It sucks that they can’t come over and watch.”

The 20-year-old, who turned down offers from the AFL to chase his hoops dreams in the US high school and college system, made his first Olympic minutes memorable in the opening round win over Nigeria, firing up his team in the late third and early fourth quarter with two steals and some physical defensive play.

Boomers coach Brian Goorjian has Green down with Josh Giddey, Dante Exum and Matisse Thybulle as the future of the national team but he also wants the Mavericks guard to make an impact in Tokyo.

Goorjian said he needs Thybulle, Green and Exum at their best so he can rest NBA veterans Patty Mills and Joe Ingles and not exhaust them like in previous campaigns.

That depth and athleticism will be even more important against Italy and Germany, who may struggle to keep pace with the explosive Boomers bench.

“The impact they bring with their length and athleticism, defensively that really helps and I thought Josh coming in late in the third quarter stood out,” Goorjian said after the win over Nigeria.

“The history of this team is that we have struggled to rest Patty and Joe and as you get down the back stretch of tournaments it has really hurt this team.

“So that helped us defensively, got us out on the fast break and into the lead. They will continue to get better and grow with our group.”

The Boomers play Italy in their second group game on Wednesday at 6.20pm AEST.

Chris Paul's rejuvenation with the Oklahoma City Thunder has been amazing to watch, says Mike Tuck