Home » Basketball » Lakers, Clippers, Suns, Nuggets, Jazz: Who are the deepest team in the Western Conference?

Make no mistake about it: the Western Conference playoffs will be gruelling this season. We could see the Clippers take on the Lakers – two teams expecting to win the title – in the very first round.

Five of the league’s best eight teams reside in the West, without even taking into consideration Damian Lillard’s Portland Trail Blazers or Luka Doncic’s Dallas Mavericks (who have currently won six of their last seven and are quietly closing ground on the top five).

Those are two players capable of dropping 50 on you any given night. A team with Steph Curry scoring 30 points a night currently sit in 10th place. Think about that for a second. There is an impossible route to the Finals whichever way you look.

The East has its own heavy-hitters and genuine championship contenders in the form of the Brooklyn Nets (turning into a clear title favourite at this stage given the Lakers’ injury woes and the return of Kevin Durant), Philadelphia 76ers and Milwaukee Bucks, there is a significant drop-off from those teams to the Charlotte Hornets and Atlanta Hawks, who are currently lurking in fourth and fifth in the conference.

It’s clear the Play-In Tournament will cause its fair share of spills and thrills, particularly in the East, but it’s the potential match-ups at the top end of the Western Conference that truly get the heart racing as we career headlong toward the post-season.

With that in mind, let’s look at those five teams, all hoping to represent the West in the 2021 NBA Finals and how, after all the drama of the trade deadline and the former All-Star buyout spree, their rosters actually stack up. Here’s the thing with the Lakers: we are still just guessing at this stage. With Anthony Davis and LeBron James both missing considerable game time this season it’s hard to say predict what their best line-up looks like.

At full health, it seems probable that Schroder and Caldwell-Pope will start at the guard spots, with Davis playing his favoured power forward position and Drummond at the five.

LeBron James is LeBron James, and fits into any line-up no matter who the other four guys are. The most complete skillset in basketball, at James’ size and with James’ strength and James’ speed, is quite the thing to have. It is no coincidence he has made the NBA Finals 10 times, including eight straight between 2011 and 2018.

This all means that the Lakers can go either big or small off the match depending on match-ups, with Harrell and Kuzma providing vital doses of scoring and rebounding in the frontcourt while Horton-Tucker and Caruso will hustle for every minute they are on the floor.

It’s hard to envisage Marc Gasol, grizzled veteran and NBA champion though he may be, getting huge amounts of action in the post-season given the addition of Drummond and the fact that the Lakers play their best basketball with Davis at center, but he will be a great locker room presence and back-up option if either gets into foul trouble.

Markieff Morris, Wesley Matthews and newly signed Ben McLemore will all likely see the floor in limited minutes as part of a deep rotation and be expected to hit the wide-open shots Davis and LeBron invariably create at a decent clip. At 34, Matthews is not the defender he once was but is still a useful body to throw at some of the star guards in the West when Caldwell-Pope or Schroder rests.

As is the case for their Los Angeles counterparts, some guesswork is necessary in predicting the starting five Tyronn Lue will settle on come the post-season. At the moment Zubac and Morris are starting in the frontcourt, with Ibaka out injured and Batum (a starter throughout the first half of the season) now coming off the bench.

This seems to have helped even out the rotation, with Batum taking now taking on more ball-handling responsibility with the second unit. As a result, the Clips have won 10 of the 12 games Morris has started in his place, partly due to the improved shooting (and therefore spacing) he provides around their two star players Leonard and George.

Another important factor will be the addition of Rondo, who was acquired at the trade deadline in exchange for veteran sparkplug scorer Lou Williams and two second-round picks. Rondo should help ease the playmaking burden on George and Leonard even further, as demonstrated by his performance against the Phoenix Suns on Thursday night where he scored 15 points and dished nine assists without a turnover in just under 20 minutes of action. Things get more complicated further down the line for the Clippers, although Zubac is a solid bench big. Luke Kennard and Terance Mann had both impressed during March but now face a battle for minutes with the acquisition of Rondo and dogged guard Beverley returning to health. Veteran center DeMarcus Cousins has been signed on a 10-day contract but whether he can bruise his way into the Clippers permanent rotation come playoff time remains to be seen.

Arguably the surprise packages of the season, the Suns have seen the most significant improvement in terms of their winning percentage compared to last year out of every single team in the NBA. They currently occupy second in the West thanks to the leadership of Chris Paul and consistent scoring of Devin Booker but have depth that stretches beyond their two stars.

Jae Crowder brings toughness, versatility and play-off experience, whilst Deandre Ayton is a stud at the center position, averaging 15 points and 11 rebounds per game. Mikal Bridges is one of the most underrated defensive players in the league, a 7’1″ wingspan menace on the perimeter hounding the opposition’s best offensive players night in and night out. Saric is a crafty reserve big man, capable of getting you a bucket either in the post or from three and playing at the four or five.

Things get a little thinner after that, but sometimes the post-season is about nothing more than a killer line-up or two, which the Suns can certainly put together with versatile wing Torrey Craig and sharpshooting second-year forward Cameron Johnson also coming off the bench. 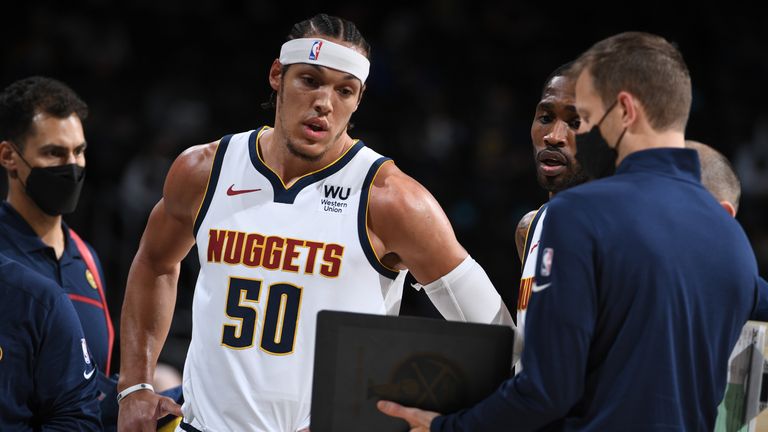 Speaking of a killer line-up or two, the Denver Nuggets have been flat-out ridiculous since trading for Aaron Gordon at the deadline. The new starting five of Murray, Barton, Gordon, Porter Jr. and Jokic are plus-61 points in just 90 minutes of game time together, with Denver closing in on the Brooklyn Nets for the best offensive rating in the league.

Jokic and Gordon have already developed borderline-clairvoyant passing chemistry (Jokic does with everyone, to be honest) while Murray has returned to ‘Bubble Murray’ form – the electric scorer we caught a glimpse of in last season’s dystopian climax, when the Nuggets reached the Western Conference finals despite going 3-1 down against the Utah Jazz and then the Los Angeles Clippers in the first two rounds.

They resurrected both series, somehow, but were calmly brushed aside by the eventual champion Los Angeles Lakers. This time they look even stronger.

Jokic is the leading MVP candidate and Porter Jr. has made incredible strides, increasing his scoring average from nine to 17 points per game, his rebounds from five to eight along with shooting a blistering 45 per cent from three on five attempts per game.

On any given night the Nuggets can outscore every team in the league but it’s on the defensive end that questions will be asked. Regardless, three-time NBA champion and Heatcheck analyst BJ Armstrong believes they are now ready to win it all.

Which brings us to the league-leading Utah Jazz, who on Thursday night won their 23rd home game in a row with a 122-103 demolition of the Portland Trail Blazers.

Quin Snyder’s team are winning more consistently than anyone else due to their three-point shooting: they are taking an absolutely ludicrous 43 shots from deep per contest and making 39 per cent of them, one of the best marks in the league.

Outside Gobert and Favors, two bigs who operate solely in the paint, the Jazz have seven guys capable of hitting shots from beyond the arc. This becomes all the more imperative during the playoffs when defenses typically have fewer weaknesses and will hone in on stopping the Jazz’s greatest offensive threat – a downhill Donovan Mitchell. Spacing the floor around him and Gobert will be crucial to any postseason success the Jazz have.

Furthermore, in Jordan Clarkson they have the likely Sixth Man of the Year, a relentless, green-light gunner with the reserve unit and a player who can conjure something out of nothing if and when the offense gets bogged down. Joe Ingles, a Sixth Man candidate in his own right, is shooting 49 per cent from deep and is one of the savviest playmakers in the league, relying more on instinct than athleticism.

The Jazz might not match other team’s talent at the very top, but they certainly run deep.

Despite it all, the Los Angeles Lakers remain the deepest team in the West, with no real positional weaknesses after the addition of Andre Drummond and unmatched line-up flexibility around LeBron James and Anthony Davis. That being said, sometimes the playoffs are all about running with your best six or seven players, not your best 10, and in that instance the Denver Nuggets have the most well-rounded team, particularly in terms of their starting five.

Right now, they are the team I would least like to face in a series if I were a head coach, not least because they have this year’s (likely) MVP in Nikola Jokic and have absolutely no idea when they are beat. That goes a hell of a long way in the perpetual fever dream that is the NBA playoffs.

Greg Rutherford found testicular lump in lockdown but ignored it