The Los Angeles Clippers and Los Angeles Lakers have reportedly voted to boycott the rest of the NBA season as athletes take their boldest stand yet against systemic racism and police brutality in the United States.

Every other team voted to continue playing the 2019-20 campaign at a meeting in Orlando on Wednesday night US time, according to a report from Shams Charania of The Athletic.

LeBron James left the meeting and was followed by the rest of the Lakers and Clippers players, Charania tweeted.

It is unclear how this latest development will affect the play-offs moving forward.

Athletes from the NBA, WNBA, Major League Baseball and Major League Soccer boycotted games Wednesday in response to the police shooting of a Black man in Kenosha, Wisconsin.

The moves dramatically escalated a season of athletes demonstrating for social justice as some expressed doubts about continuing to play amid widespread social unrest.

The wave of boycotts and postponements was sparked by Milwaukee Bucks players responding to the shooting of Jacob Blake by refusing to come out of their locker room Wednesday afternoon for a play-off game against the Orlando Magic. 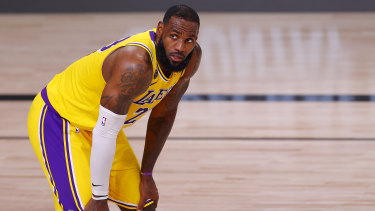 LeBron James joined the Lakers in deciding to boycott the NBA at a meeting in Orlando.Credit:Getty Images

Two more NBA playoff games scheduled for Wednesday night were quickly postponed, inspiring players in other leagues to follow the Bucks' lead and causing numerous professional basketball, baseball and soccer games to be called off because athletes would not participate.

A meeting Wednesday night was open to players and coaches from the 13 teams still at Walt Disney World to determine next steps – in essence to decide how soon, or even if, the NBA play-offs should resume.

Players from the Boston Celtics and Toronto Raptors were already deep into discussions about boycotting the teams' second-round series-opener Thursday when the Bucks staged their boycott. A league spokesman, when asked about Thursday's three scheduled games, said no determination had been made about the NBA's upcoming schedule.

Also Wednesday, players for the WNBA's Washington Mystics arrived for their game against the Atlanta Dream on Wednesday night wearing T-shirts that spelled out Jacob Blake's name and appeared to have holes in the back to signify bullet holes.

In Major League Baseball, three games were called off because of the players: the Milwaukee Brewers hosting the Cincinnati Reds, the San Diego Padres playing the Seattle Mariners, and the San Francisco Giants-Los Angeles Dodgers game.

Five matches in Major League Soccer were postponed Wednesday after players objected to playing, while a sixth match — Nashville at Orlando in front of a reduced-capacity crowd — went ahead, a sign of how the situation was still evolving.

And several athletes opted individually to not play, including tennis star Naomi Osaka, who said she would not play in a scheduled semi-final at the Western & Southern Open in New York, a tune-up for the US Open that begins next week.