The London Marathon will return in 2021 after last year’s event featured elite athletes only due to the Covid-19 pandemic. However, this time around plans have been put in place for 100,000 people to take part. A record 50,000 people will run the central London course, with another 50,000 running the 26 miles at a location of their choice in a virtual event.

London Marathon event director Hugh Brasher said: “The London Marathon is a wonderful example of sport as a force for good while raising millions for charity.

“It’s all about communities and people coming together and one of our founding pillars is ‘to have fun and provide some happiness and a sense of achievement in a troubled world’.

“The world record-breaking success of the virtual event in 2020 and the incredible stories from participants across the globe showed how the world’s greatest marathon brought light and hope in the darkness of the pandemic.

“We want to offer that again and we have also accelerated the plans we have been working on for some years to increase the number of finishers on the streets of London to 50,000.”

This year’s London Marathon is scheduled to take place on Sunday, October 3, moving from its traditional April date for the second year in a row.

Brasher is confident the event will be able to go ahead after Foreign Secretary Dominic Raab said all adults would be offered a first Covid vaccination dose by September.

“It is a terrible time at the moment,” said Brasher.

“It is difficult in a way for a lot of people to imagine from where we are now about what October might look like. 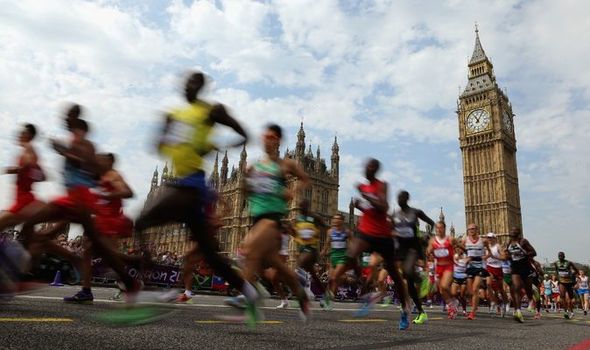 “But the Government has said that everyone in this country should be vaccinated by September.”

Asked how organisers would make elite and mass race participants feel confident about taking part, Brasher said: “I think the elite is probably quite easy, they are running so quickly there aren’t many people around them.”

He added: “There’s still lots of unknowns. We do know that.

“And we will change our plans, develop the plans, to be able to deliver what we are announcing today.

Can I take part in the London Marathon?

The ballot for this year’s London Marathon is already closed, with applicants discovering their fate on February 8.

Those who were not successful will have an “exclusive window” to join the virtual event from February 9-16.

On February 16, general entries for the virtual event will become available.

A London Marathon statement read: “Everyone who entered the ballot for the 2021 Virgin Money London Marathon will find out on Monday 8 February if they have been successful or not.

“Unsuccessful applicants will have an exclusive window from Tuesday 9 February to Tuesday 16 February to enter the virtual event.

“General entries will open on Tuesday 16 February, on a first-come, first-served basis.

“Entries cost £28 (plus an additional £10 for entries outside the UK to cover international postage) and all finishers will receive their running numbers before the event and their coveted official finisher medal and New Balance finisher’s T-shirt post-event.

“Once again, the Virgin Money London Marathon App powered by TCS will enable runners to track and record their runs.”

College basketball transfer scorecard: Who has surprised, who has disappointed?