Longley and Kerr were teammates at the Bulls during the club’s Michael Jordan-led three-peat of championships in the late 1990s. 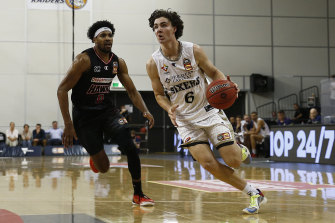 Josh Giddey in action for the 36ers.Credit:Getty Images

Kerr has gone on to coach the Golden State Warriors to two championships but the team is re-tooling after injuries and the loss of Kevin Durant has left them falling down the standings in recent years.

With Warriors superstar Stephen Curry still among the NBA’s elite superstars and shooter Klay Thompson returning from a ruptured Achilles tendon, the team also has picks seven and 14 in the draft.

Giddey, an 18-year-old, 200-centimetre point guard, starred in the NBL with the Adelaide 36ers this season, winning rookie of the year and just missing out on making the Australian Boomers roster for the Tokyo Olympics.

Longley told NBA Australia he has no doubt Giddey is equal to Charlotte Hornets star LaMelo Ball who also impressed in the NBL in 2019-2020 with the Hawks before being picked at No.3 in last year’s draft.

Longley closely watches the NBL as he is a special advisor to the Sydney Kings.

“I’ve been on the phone with Steve Kerr once a week saying: ‘Look at this guy. Steve, don’t miss this guy, do not sleep on this guy,’” Longley told NBA Australia.

“I’m going to surprise you but I think that his court vision, his spatial awareness and his understanding of that part of the game is at the same level, this past season, as LaMelo Ball. At the same level or better than LaMelo Ball was when he was in the NBL.

“Here’s the thing, he’s 6′8 and probably still growing. His dad has passed on some really good genes, as far as his resilience, his toughness, his humility, and his Australian-ness, let’s just go with that.

“He’s going to work hard, he’s a tough kid, and I believe he’s going to translate really well. I’d be really surprised if he doesn’t kick some arse.”

The Victorian guard is in the US preparing for the draft and despite starting last year outside the predicted first-round of picks, he has wowed enough teams that he is tipped to be a top-10 selection.

Giddey won admirers for the way he accepted being cut from the Boomers and remained with the team. He scored 14 points, grabbing four rebounds and dishing three assists in the lead-up game against Nigeria who featured a number of NBA players.

The NBA draft will be held next Friday in New York.