Victorians are set to enjoy their biggest indoor sporting crowd since the first coronavirus lockdown in March when the NBL season tips off in Melbourne. 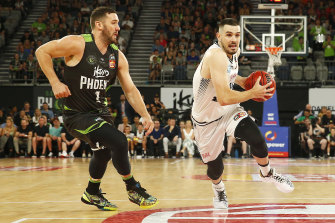 It would be the first basketball game in front of fans in the state since United's semi-final against the Sydney Kings on March 2.

In most years NBL sides can't access Melbourne Park in January as it's locked down for the Australian Open, but with the tennis expected to start in early February, there could be an opening for the NBL.

At present only a small crowd could attend due to COVID-19 restrictions but the two clubs will hope that improves by early January.

The Phoenix's home clash with Brian Goorjian's Hawks is also in discussions to be held at John Cain Arena on January 14 as is United's game against New Zealand Breakers on January 15. That game could also be played January 13.

The three games don't have a venue attached at present but NBL commissioner Jeremy Loeliger said talks were continuing with the Victorian government in hope of securing the main venue.

"Capacities at venues will vary according to their location but the aim is to play as many games in front of as many fans as possible as restrictions are further eased over the coming months," Loeliger said.

"We are currently in discussions with the Victorian government but our preference is to play the first three games of the season at John Cain Arena.

"But we will need to remain flexible with our scheduling and it will be subject to change based on border controls and health advice. For example, games in Adelaide have been currently scheduled on the basis that border restrictions will be lifted.”

Talks over basing an NBL hub in Victoria are also continuing with the government, so all nine teams could still play several rounds across the state later in the season.

The Breakers will begin their season based in Melbourne and the NBL will try to schedule the majority of their away games during the first half of the season in hope they can return to playing in New Zealand later on, when it is hoped travel between the two nations will be further eased.

Loeliger said the league wanted all clubs to have a chance to play home games, which is a vital revenue stream, but a hub remains in play for at least part of this season with the "rolling schedule" to be announced as the season goes on.

Game times are also yet to be confirmed, pending talks with broadcasters and stadium availability. SBS Viceland and ESPN will continue to screen games this season along with SKY Sports in New Zealand.

"All teams will start the season playing games in front of fans in their home cities except the New Zealand Breakers who will be based out of Melbourne and travel for games for the initial part of the season," Loeliger said.

"We hope the Breakers will be able to return to New Zealand once border restrictions and scheduling allows for that to happen and play as many games as possible in front of their fans."

Loeliger also said the NBL Blitz pre-season tournament wouldn't go ahead but teams would schedule their own pre-season games throughout December.

British Basketball League: All you need to know ahead of 2020-21 Championship