Melbourne United have the all-important game one win over Perth Wildcats in the NBL grand final series.

But the question they might be asking is: how?

Turnovers and missed opportunities saw United twice stare down overtime in the final seconds but Perth couldn’t make their shot with 12 seconds to go and Wildcats captain Jesse Wagstaff saw his three attempt, after a United turnover, rolling out just before the buzzer.

A 73-70 win was United’s lowest winning margin of the season but it was arguably their most important victory and it came in front of a sell-out 11,000 strong crowd in Perth. They need two more wins in the best of five series to claim the title.

“I think we dodged a bullet but it was a gutsy win for our guys to lock in and win this,” Goulding told ESPN post-game.

With NBL most valuable player Bryce Cotton out injured for the series and young gun Luke Travers a late withdrawal on game day due to calf soreness, the Wildcats knew they had to control the tempo and keep United to as fewer possessions as they could. 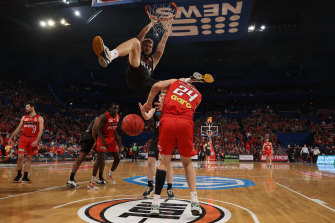 That plan worked to a tee in the first half as United shot poorly and the Wildcats went through 11 players while Kevin White and Todd Blanchfield found space on the three-point line to shoot some vital baskets.

A few additional misses hurt the Wildcats who still held a 35-31 lead at half-time with Goulding admitting during his TV interview at the break that his side was lucky they weren’t trailing by more.

Goulding stepped up in the third term and so did Boomers teammate Landale with the United captain nailing 13 points for the term and Landale adding eight of his own with the pair out-scoring the Wildcats for the term.

Goulding topped off his term with a three from way outside on the three-quarter time buzzer to give his side a 60-53 lead heading into the last.

Just as important was the efforts of McCarron and veteran power forward David Barlow who were alongside the two big guns for much of the term.

To make matters worse for Perth, championship-winning shooter Clint Steindl didn’t return in the second half after picking up a groin injury.

As expected, the Wildcats fired up early in the last ending a five-minute scoreless run and getting back within five points with five minutes to play.

This is where McCarron found another gear hitting a rolling Jo Lual Acuil for a dunk and then making a runner in the key soon after.

Perth persisted in the last term with White catching United off guard to make a lay-up and bring the home side within two points with two and a half minutes to play.

Game two of the series will be in Perth on Sunday at 5pm AEST.

Chris Paul: Phoenix Suns have got to close out quarters better, LA Clippers were aggressors in Game 5