Melbourne United's NBL off-season has stopped in its tracks after 12 players tested positive for COVID-19.

The next NBL season has already been pushed back until early December due to the ongoing pandemic, but teams have continued training to maintain fitness and touch. 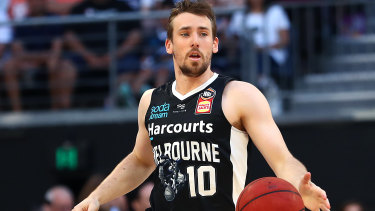 Mitch McCarron is one of 12 Melbourne United players to have tested positive for coronavirus.Credit:Getty Images

McCarron was sending replies to well-wishers on social media throughout the weekend.

The rest of Melbourne United's training squad and on-court staff were tested and went into isolation with the league announcing on Sunday that a total of 12 players had tested positive.

The NBL did not list the names of those other positive tests as they are a mix of contracted players who are in Melbourne and uncontracted training players, but the team cut back the numbers at training when the second lockdown began for their three sessions each week.

No one is believed to have shown any signs of serious illness so far and no staff members have tested positive with the club having almost all its staff working from home.

The team were using COVID-19 protocols for their training but the virus found its way in and spread.

It's understood Melbourne's training base, the showcourt at the Melbourne Sports and Aquatic Centre, will undergo a deep clean as a precaution.

The NBL has ordered both Melbourne United and rivals South East Melbourne Phoenix to halt all training until further notice.

The Phoenix train at the State Basketball Centre in Wantirna South and have not reported any positive tests but all those training with the club have been sent for tests and told to stop training as a precaution.

No Phoenix players have tested positive and there is hope that will remain the case as it's not believed anyone was training with both clubs in recent weeks.

NBL chief executive Jeremy Loeliger said the health of those infected would be the league's top priority.

"Our primary concern is the health and welfare of our players, staff and their families," Mr Loeliger said.

"This is a challenging time for everyone concerned and we are working closely with the clubs and the Australian Basketball Players' Association (ABPA) to provide support for all those affected.

"We are also working closely with the Department of Health and Human Services (DHHS) to manage the outbreak and limit any risk to the wider community."

George says he had anxiety, depression in bubble