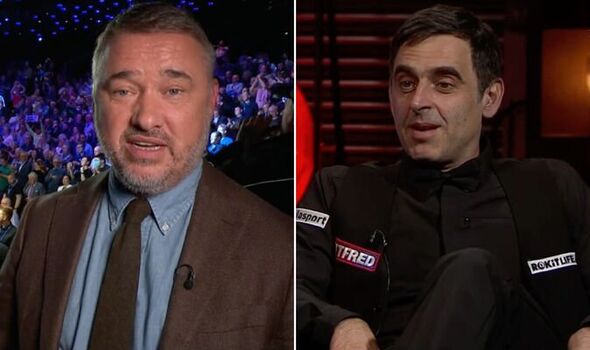 Ronnie O’Sullivan insists he’s not that moved by matching Stephen Hendry’s World Snooker Championship record on Monday night – even though he was in tears post-match. O’Sullivan’s 18-13 win over Judd Trump in Sheffield saw him equal Hendry’s modern-era record of seven world titles.

O’Sullivan is the oldest world champion ever at 46 years old and his seventh success comes 21 years after his first at the iconic Crucible. Hendry reacted by insisting that it is an “honour” to share the record with The Rocket.

“I’m actually surprised it’s taken him so long to win seven,” added the Scot, who labelled 39-time ranking title winner O’Sullivan “a winning machine” and tipped him to “want eight” next year.

Yet O’Sullivan himself was rather blasé when asked about matching Hendry, insisting: “I think it meant more to him [Hendry] than me to have seven world titles but we will share it. Hendry is an absolute legend of the game. It is just a number – I do not get too caught up in that.”

The world No 1 also told the BBC: “I’ve never bothered about records! Don’t get me wrong when you get them, it’s kinda nice. But I’ve never performed well if I’m going for stuff like that, I’ve just tried to enjoy my game, compete and enjoy being on the circuit and enjoy what I do and work hard at my game.

“I honestly don’t have targets. I’ve loved every tournament this year, I just love playing. I like to win but it’s not the be-all and end-all. I love competing with the guys and being around the guys.”

Despite that, O’Sullivan admitted he struggled to hold in his emotions in the latter stages of the tournament. He actually broke into tears upon his victory over Trump after the pair embraced for over a minute, with Trump’s words clearly affecting the seven-time world champion.

He said: “I am not all in with snooker and that was a problem this week. I got emotionally involved and it is hard not to at this tournament. For 11 months, it was sort of holiday time, win or lose, it did not matter. This was a different beast.”

O’Sullivan added of his embrace with Trump to Eurosport: “I was so emotional. To finally get over the line, I just thought it would never happen. I gave him a big hug and I was just sobbing in his arms. And he said such lovely words.

Giannis Antetokounmpo has an MVP … and all the dad jokes