The Sydney Kings have shelved plans for a rebrand after an agreement was reached with the Sydney Opera House Trust for the team to continue using their historic logo for at least the next three years.

The Kings have used the same badge since 1988, which features a stylised line resembling the famous sails of the Opera House. 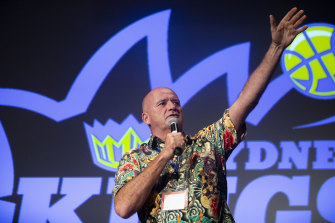 Sydney Kings owner Paul Smith speaking in front of the NBL side’s historic logo, which they’ve had since 1988. Credit:Dominic Lorrimer

But the club was forced to weigh up alternative options after talks between the National Basketball League – who hold the Kings’ IP – and the Opera House over a new licensing deal fell through earlier this year, with NBL officials baulking at demands for a $50,000 fee from the landmark’s trust.

The revelations outraged not only Kings fans but supporters of other Sydney sporting teams, including the Swans, Roosters and Sixers, who feared their teams would have to either change their logos or pay up big.

NSW deputy premier John Barilaro even waded into the mess, accusing the Opera House of a “cash grab by an elite group of society” and vowing to get to the bottom of it.

However, as reported by the Herald last month, the Kings and the Opera House re-opened discussions and have been able to strike an amicable deal, which ensures the team’s visual identity will be kept in tact.

“It was honestly both of us coming to the table. In the past, because our IP is owned by the NBL, they’ve led those discussions and while we were involved, it was more at arm’s length,” said Kings chief executive Chris Pongrass.

“Now, we were able to have really open, positive and frank discussions and to tell you the truth they’ve been fantastic throughout the whole process.

“I fully understood their position – it’s their rights and ownership but the fact they’ve been willing to find a way that we can get something done, it’s exciting.

“And it was exciting to see how many members, fans and Sydneysiders that were really pushing for the logo to continue. We saw a lot of passion, and it’s promising for us and our fanbase to show how much support there is for the team.“

An Opera House spokesperson said the venue was also pleased with the outcome, and added: “The conditions of the agreement remain unchanged from the reduced offer put forward by the Opera House to the club in April 2020, in light of the difficult economic climate.”

The Kings, who lost head coach Will Weaver to the NBA’s Houston Rockets last month, are due to begin their pre-season campaign with a clash against the Hawks on Sunday at Qudos Bank Arena.

They will play their first match of the new NBL season on January 15 against the Perth Wildcats – a rematch of last season’s grand final series, which Sydney pulled out of after three games due to the pandemic.

British Basketball League: All you need to know ahead of 2020-21 Championship

LaVar Ball is back with another absurd prediction: All three Ball brothers will team up on the Lakers