This is how you dismantle a shipwrecked history. You do it against the top seeded team in the West.

You do it being rescued by a relatively unknown player who in so many ways defined the slogan ‘Next Mann Up’. You do it while missing the only credible winner on the roster. You do it without Lob City and the Knuckleheads and Danny Manning and Bob McAdoo and Randy Smith and… well, that’s about it, because the pickings are slim among saviours for this franchise.

In their 50-year history dating back to when they were based in Buffalo, the Clippers never reached the conference finals until now. That’s the longest dry spell in league history. And in a style and manner that’s so unlike the Clippers we’ve all known and mocked throughout the years, they used a collective and inspired effort on Friday night that was heavy on heart and desire to finally reach that slippery and elusive level.

All the grime of the past was scrubbed away by the Terance Mann Game and a rally from 25 points down and a second-half clap-back against the Jazz that even Lakers fans will concede was epic. The Clippers are actually moving on, deeper than they’ve ever travelled in the playoffs. They’re probably moving on without Kawhi Leonard, but moving on just the same.

Right before the final buzzer of the clinching Game 6, coach Ty Lue did what he had to do. During a stoppage in play, he subbed in players, one by one, to replace Paul George and Reggie Jackson and saving the best for last, Mann, so each could bathe in the deserved standing ovation inside Staples Center, which coincidently received the governmental green light to be filled for the first time all season.

“This is the first time I’ve experienced a crowd like this since I became a Clipper,” said George.

Sure, give the Clippers a hand. Why not? This was only the most glorious night in franchise history.

Let’s get straight to the details, starting with the obvious: Terance Mann, 39 points? Before the season began, Charles Barkley might have asked: Who he play for? Actually, the Clippers prepped the young guard over the final few months of the season, and he prospered enough for the Clippers to trade away Lou Williams at the deadline.

But confidence in youth only carries so much weight in the playoffs. Mann was buried on the bench to start this second-round series with Utah, getting nine minutes combined in the first two games. And of course, he received a social media-scolding after infamously bypassing a layup and passing off against the Mavericks, with folks calling his inexperience in question.

Gradually, though, Mann made his way back into the meat of the rotation, and his minutes rose right along with his confidence, and he began to act like he belonged. Just a game earlier, he had the audacity to dunk on Rudy Gobert, the three-time Defensive Player of the Year.

This time, he spearheaded the Clippers’ Game 6 comeback with bucket after bucket and his team-mates kept feeding him pass after pass. He established a career-high point total – not just an NBA career-high; he never even tallied this many points in a college game. He shot 7-for-10 from deep.

After he sank a three-pointer from the corner – Mann shot an incredible 15-for-21 overall – jubilant Clippers chairman Steve Ballmer rose from his seat and fell splat on the floor, and it was quite the appropriate reaction. Nobody quite believed what they were seeing from the 24-year-old guard. 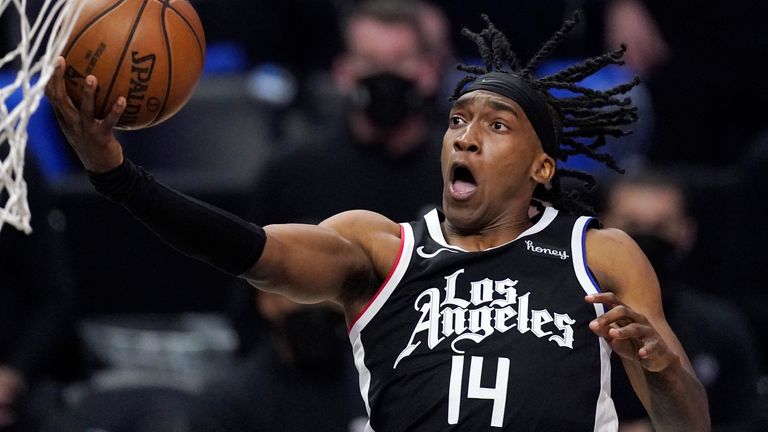 But it was more than Mann. Jackson was ‘Mr Big Shot’ for the Clippers over much of the last four games, all victories, and he supplied 27 points. Jackson, too, was relegated to the bench when the season began, but now is keeping Rajon Rondo, aka ‘Playoff Rondo’, on the bench in what qualifies as a stunning reversal of personal fortune.

Nic Batum was previously a cast-off from the Hornets, who stashed him on their bench for two years in order to groom youngsters; he arrived this season in LA and was given a role that expanded greatly in the playoffs. For the second straight game, Batum played 40-plus minutes, this time producing 16 points, seven rebounds, three blocks and two steals.

Paul George shed his ugly playoff skin and showed himself to be a leader and, without Kawhi, a solo star the Clippers craved the last two games. George needed this result as much as the Clippers franchise did.

The Clippers became the first team to erase a pair of 0-2 series deficits in the same playoff season. Also, if you may painfully recall, they blew a 3-1 lead in last year’s second round, which led to plenty of scorn and a new coach, so this was redemption.

More impressively, they won a pair against the Jazz while missing Leonard. This from the team which still hasn’t revealed the extent and description of his knee injury; that’s still a mystery, same for his status for the start of the conference finals.

Until then, the Clippers will enjoy what George termed their “special night”. He’s right – it doesn’t get any more special than this. The Clippers are in the conference finals, words that have never been spoken or typed before.

The scenes of a Lakers title celebration like no other

Opinion: Elgin Baylor was the most underappreciated of all NBA superstars