The Tour de France in numbers

Police are using Facebook in an attempt to find the fan who disrupted the Tour de France on Saturday, reports claim. The event in Brittany came to a standstill when a spectator collided with Tony Martin, which then caused a domino effect of racers tumbling over. Nobody had any life-threatening injuries but some were forced to withdraw.

The fan was holding a sign that said ‘Go, Gran, Granddad,’ in a combination of French and German.

She wasn’t paying attention to the race at the time, instead staring into the cameras as the participants then came up behind her.

That was when Martin collided with her sign, causing a domino effect that saw over 20 racers fall to the ground.

The whole of the Jumbo Visma team was wiped out, with Sonny Colbrelli, Julian Alaphilippe and Jasha Sutterlin also impacted.

And Cycling.com claim police are using Facebook in order to track down the woman, who fled the scene in the aftermath. 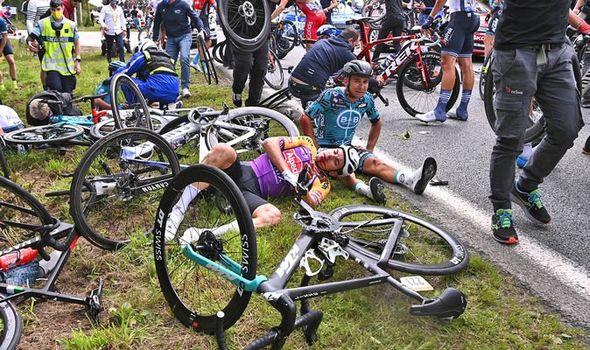 A spokesperson for the Finistere gendarmerie addressed the incident in the aftermath, saying: “The spectator who caused this accident left the scene before the arrival of the investigators.

“Everything is being done to try and find her.

“She was wearing glasses and dressed in blue jeans, a red and white striped sweater, and a waxed yellow jacket.”

And, now, it appears social media may be the key to tracking her down.

If found, she could face a year in prison in accordance to French law – with her offence considered an indictable offence. 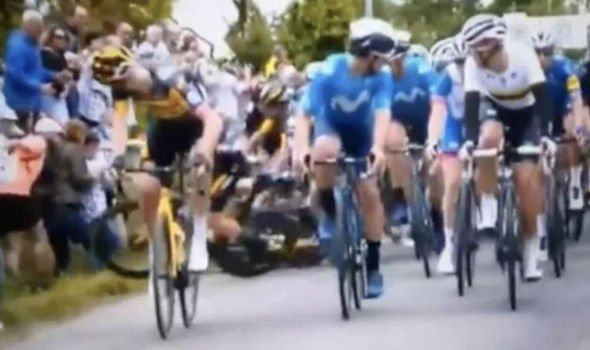 That’s punishable with up to 12 months behind bars and a fine equivalent to just under £13,000.

Prosecutors have confirmed they had opened a criminal enquiry for ‘deliberately violating safety regulations and so causing injuries that might prevent someone working for up to three months.’

And whether they’re able to discover her identity remains to be seen.

Deputy race director of the Tour de France, Pierre-Yves Thouault, revealed a complaint had been filed and they were determined to sue the woman in question over her dangerous actions.

“This is unacceptable behaviour,” he said. 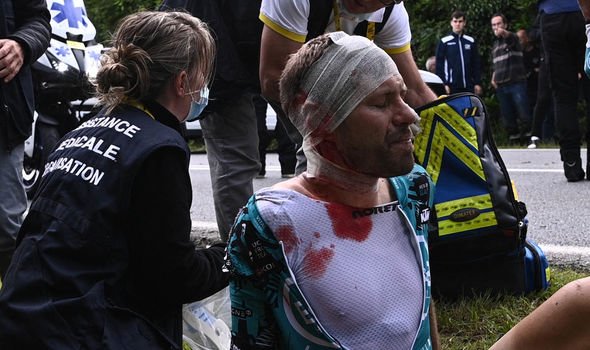 “There are safety rules to follow. Spectators don’t cross the road, they don’t take selfies.

“Frankly, her attitude was insane. The show is the riders, not spectators who want to be on TV.

“The Tour must remain a party but because of the attitude of a very small minority, it is ruined. We can no longer accept this.

“We are suing this woman who behaved so badly.

“We are doing this so that the tiny minority of people who do this don’t spoil the show for everyone.”

Team Qhubeka NextHash, Africa’s first UCI World Tour Team, had a clear message for spectators after the incident and encouraged the crash to be a wake-up call for those watching from the sidelines.

“Our beautiful sport is completely unique and extra special in how accessible we are to the fans,” they tweeted.

“If we could please remind all spectators along the roads to stand back, at a safe distance, as the race passes by.”

British cyclist Chris Froome revealed he ‘feared the worst’ when it happened.

“I couldn’t move the left peg initially but I think it was just the big impact,” he said.

“I was in a lot of pain and I wasn’t sure I was going to be able to pedal.