Milwaukee Bucks guard George Hill didn’t want to talk basketball. Not even after the Bucks defeated the Orlando Magic and took a 3-1 series lead.

In that moment, his mind – frustrated and angry – and his heart – broken as it is – was with Jacob Blake and his family. Blake is the Wisconsin man who was shot by Kenosha police on Sunday,  in an incident captured on video.

“Watching stuff that happened in Wisconsin the other day really breaks my heart. We’re down here playing the bubble to do these things for social justice and all that, and to see it all still going on and we’re just playing the games like it’s nothing, it’s just a really messed up situation right now.”

When asked a basketball question, Hill replied, “I don’t think we should be talking about basketball today. We should talk about the Blake family and what’s going on. It’s devastating and basketball shouldn’t even be on our mind right now. We’re thankful for the win, but none of this really matters.”

Hill even questioned why the NBA is playing games and made a plea to institute social justice reform.

“First of all, we shouldn't even have came to this damn place to be honest,” Hill said. “Coming here just took all the focal points off what the issues are. But we're here. It is what it is. We can't do anything from right here. But definitely when it's all settled, some things need to be done. This world has to change. Our police department has to change. Us a society has to change. Right now, we’re not seeing any of that. Lives are being taken as we speak day in and day out. There’s no consequence or accountability for it. That’s what has to change.” 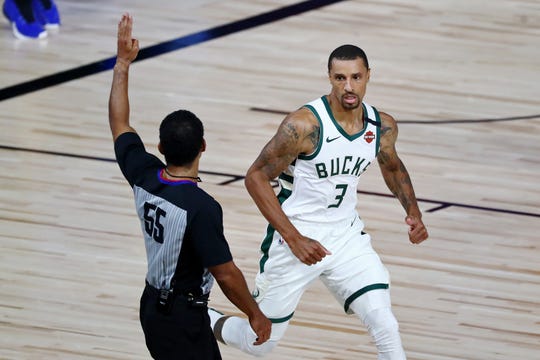 Hill was angry at what he saw on the video.

"It's just sickening. It's heartless,” he said. “Like I said, you're supposed to look at the police to protect and serve. Now, it's looked at harass or shoot. To almost take a guy's life. Thank God he's still alive. I know the cops are probably upset he’s still alive. I know they surely tried to kill him. But to almost take a guy's life, especially in front of one's kids, that wasn't resisting, in his back at point-blank range, is a heartless and gutless situation. We need some justice for that.”

Earlier in the day, Bucks coach Mike Budenholzer used his pregame news conference to send thoughts and prayers to Blake and his family and urge systemic change.

Opinion: How will Lakers’ Anthony Davis bounce back from uneven bubble performances?