The Memphis Grizzlies have announced they will be retiring the first two jerseys in the franchise’s history, with the honour being awarded to ‘Grit and Grind’ era legends Zach Randolph and Tony Allen.

The team will retire Randolph’s number 50 jersey on Saturday, December 11 against the Houston Rockets. Allen’s number 9 will be added to the rafters of the FedEx Forum on Friday, January 28 when the Memphis Grizzlies host the Utah Jazz.

When Grind City Media’s Chris Vernon made the announcement live to Allen, revealing his jersey would be retired in front of former teammate Mike Conley Jr. and the Jazz, Allen responded emotionally.

“It’s a dream come true,” he said. “The whole build up, bringing my swagger here, the demeanour, the poise in just working every day, the grit and grind culture here … It’s a complete honour and I’m thankful, real thankful.”

Jan 28th it’s lit! Seeing that #9 hanging up for life is my stamp that I handled my assignment! #GNG

Thanks to the @memgrizz and the City of Memphis!!! pic.twitter.com/dtcDiqrj7N

Conley was an integral part of the ‘Grit and Grind’ period alongside Randolph, a bruising power forward and Allen, a defensive specialist at the guard position.

Marc Gasol, currently of the Los Angeles Lakers, was the other key player during the era in which the Grizzlies established themselves as one of the best teams in a stacked Western Conference and a borderline championship contender between 2010 and 2017.

The moniker came from the tough, physical style of play that saw Memphis prioritise defense and scoring in the paint over the kind of pace and space offenses that were becoming more common in the league at the time. The Grizzlies regularly finished among the top teams for steals and points allowed but among the bottom for pace and three-pointers made. 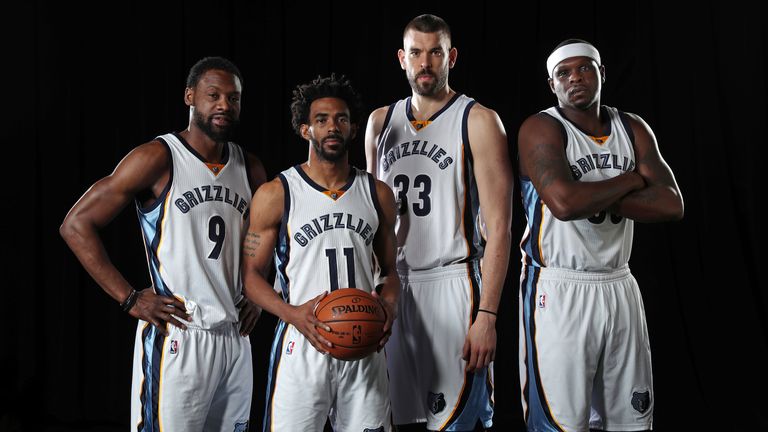 Randolph, nicknamed ‘Z-Bo’, averaged 16.8 points and 10.2 rebounds per game in his eight-year stint with the Grizzlies, while also being named as an All-Star twice in 2010 and 2013.

Allen, meanwhile, wasn’t much of a threat on the offensive end but still proved invaluable to the Memphis identity. In seven seasons with the team he was selected to three All-Defensive First Teams and three All-Defensive Second Teams. His nickname, ‘The Grindfather’, is telling.

While the ‘Grit and Grind’ Grizzlies never reached the NBA Finals, they were a playoff team for seven straight seasons and missed the post-season for three consecutive years immediately following the departures of Randolph and Allen before 2017-18.

The closest they came to a title was in 2012-13, when the Grizzlies knocked out the fourth seed Los Angeles Clippers and upset first seed Oklahoma City Thunder before going down 4-0 to the San Antonio Spurs in the Western Conference Finals. Two seasons earlier against the Spurs, they had become only the fourth eighth-seeded team in NBA history to knock out a first seed in the first round.

Clippers’ Paul George: ‘I owe them a trophy