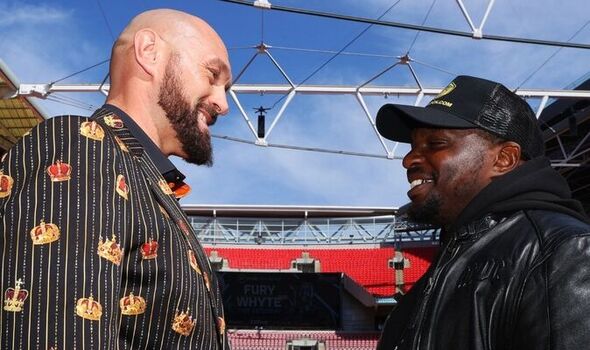 Tyson Fury and Dillian Whyte go to war on Saturday night at Wembley in front of a record-breaking crowd of 94,000 spectators. The two heavyweight titans are looking to serve up a classic under the famous arch in what is one of the biggest British fights of all time.

The bout will be Fury’s first on UK soil since 2018 following five successive fights in the United States, while it also represents the first official mandatory defence of his straps following last October’s thrilling trilogy clash with Deontay Wilder.

Fury was full of respect for his rival on Wednesday at the press conference when he reminisced about how he once treated Whyte “like family” after inviting him into camp for sparring.

Yet all respect will fly out of the window once the first bell sounds and both are expected to go in search of the knockout.

The Gypsy King has been a totally different animal under trainer SugarHill Steward, who helped him executive two successive stoppages of Wilder.

However, in the opposite corner, Whyte will be conditioned to go the distance if that is what is required.

The Body Snatcher is in the shape of his life and has left no stone unturned in his quest to become the world heavyweight champion.

Whyte has been in camp in Vilamoura, Portugal before heading back to the UK earlier in the week.

He has been waiting patiently – to put it lightly – for his long-awaited shot at world honours, something that has continuously eluded him due to politics.

The mouthwatering showpiece will be shown live on BT Sport box office at the cost of £24.95.

Coverage of the undercard gets underway from around 6pm from Wembley.

You can buy on your TV box by heading to BT Player or Channel 494.

You can also watch on mobile devices, Mac or PC with the BT Sport Box Office app for iOS and Android.

The main event is scheduled to get underway at 10pm, with ring walk pencilled in for around 9:45pm.