Cage Warriors, the promotion that unearthed UFC stars Conor McGregor, Michael Bisping and Dan Hardy, will take its cage to California as it branches out across the pond.

The organisation has built a well-deserved reputation for producing talented fighters capable of making the step up from the domestic and European scene to the global stage.

To date, a remarkable 104 Cage Warriors fighters have gone on to earn contracts to fight in on the biggest stage in the sport, the UFC.

Those athletes include some of the most well-known names from this side of the pond.

Irish superstar McGregor captured Cage Warriors titles at featherweight and lightweight before heading to the UFC and repeating the feat to become the first “champ champ” in UFC history.

The first British fighter to fight for a UFC world title, Dan “The Outlaw” Hardy, also earned his stripes on the domestic scene as a two-division Cage Warriors champion.

JUST IN:
UFC 263: Adesanya returns to 185lbs to defend title against Vettori 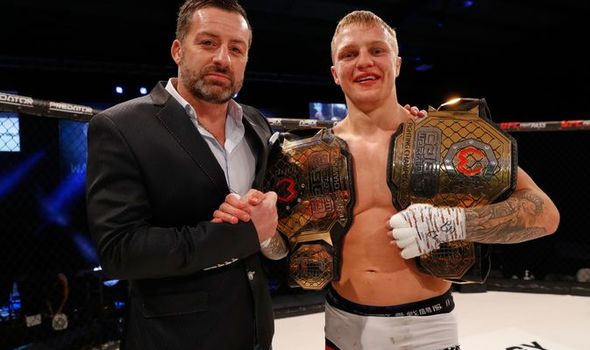 And the first, and so far only, British fighter to go on to capture championship gold in the UFC, Michael “The Count” Bisping, also cut his teeth in the Cage Warriors cage early in his MMA career before winning The Ultimate Fighter, joining the UFC and becoming the undisputed middleweight champion of the world.

The organisation was one of the biggest British success stories of the pandemic, as Cage Warriors successfully implemented COVID-safe bubbles to host events behind closed doors during the height of the coronavirus outbreak in the U.K.

In the process, they also made history by becoming the first MMA promotion to receive official government approval, with Cage Warriors events officially recognised and approved by the Secretary of State Grant Shapps as part of a list of government-specified events that permitted participation by elite athletes.

Now the London-based promotion is heading to the United States where, working under the approval of the California State Athletic Commission, Cage Warriors will host its first event on American soil.

Cage Warriors 126 will take place on August 1 in San Diego, California, with the event set to be held at Humphreys by the Bay, a special open-air waterfront venue usually reserved for music and entertainment gigs. The event will allow a limited crowd of around 500 fans to watch the action live from cageside.

The show will feature a preliminary card at 4:00pm local time, followed by a main card of featured bouts starting at 7:30pm.  A UFC athlete meet-and-greet session will also take place for the fans in attendance.

The event will be streamed live on the UFC’s digital streaming platform, UFC Fight Pass, as well as via Cage Warriors’ broadcast partners across the globe.

“San Diego will have two high-end events this year with a small crowd of 500 for the live broadcast,” Cage Warriors president Graham Boylan told Express Sport.

“The show will move back to arenas in early 2022 when we will also announce new states to the schedule.

“We will build out our U.S. roster and look forward to introducing more American fighters to our schedule.

“Fighters, coaches and managers should contact us at  [email protected], as our matchmaking process is already underway.”

Boxing needs Spence-Crawford in 2021, and the fighters need it too