Marshall retained her WBO middleweight title with a ruthless knockout of Maria Lindberg on Saturday night, then called for a massive clash with Shields, America’s multi-weight world champion.

Shields is set to make her MMA debut with the Professional Fighters League in June, but promoter Salita says the 26-year-old remains open to a fight against Marshall, her former amateur rival. 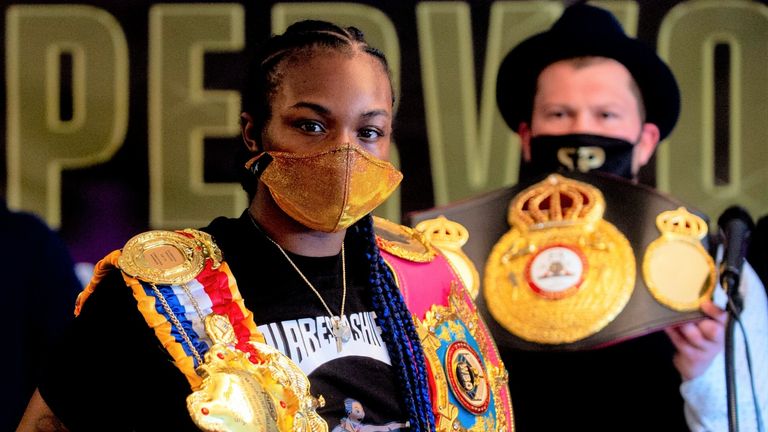 “We definitely want to get the fight done,” Salita told Sky Sports.

“We all see it as a mega event for women’s boxing.”

Marshall, who defeated Shields at the 2012 World Championships, has questioned whether a professional showdown will happen.

“I punch too hard for Claressa Shields,” Marshall told Sky Sports. “I punch far too hard and she doesn’t want to know.

“But I’m not going to wait about forever for her. I’d like to get out again in the summer.

“If she gets some guts, a big showdown with her at the end of the year.”

“I’ve had a number of calls with [manager] Mark Taffet and Dmitriy Salita.

“Of course, they know how dangerous the fight is. They want a load of money and I’m prepared to pay a load of money, because I think it’s a tremendous fight.

“I back her every day of the week. I love Claressa Shields, I think she’s great. I think she’s done such a great job for women’s boxing.

“There is no way she goes 10 rounds with Savannah Marshall.

“Savannah Marshall is the only girl to beat Claressa Shields in her entire life. She beat her in the amateurs, she will beat her in the professionals. I am so, so convinced.”

Shields strengthened her esteemed status in March, becoming the first undisputed champion of two weight divisions, and is ready to discuss a deal with Marshall and Hearn.

Speaking on her official YouTube channel, Shields said: “You want boxing to be equal, you want to close the disparity gap in women’s boxing.

“Just give me the money that I asked for and we can make the fight happen, because you think Savannah Marshall can knock me out, that the fight won’t go 10 rounds, that she’s too strong, too skilled for me.

“Great, I love that. Let’s make the fight happen, let’s get it done, and let’s give the fans what they want.”