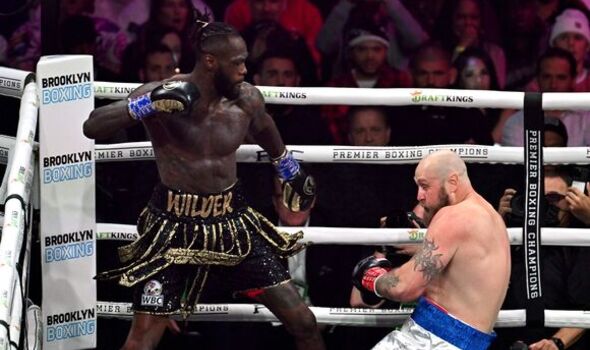 Deontay Wilder offered a heartfelt apology to Robert Helenius after savagely knocking out the Finnish fighter in the opening round of their heavyweight fight. After being out of the sport for over a year following his trilogy defeat to Tyson Fury, Wilder returned to the ring in sensational fashion on Saturday night as he landed a clinical short right hand 2:57 into the bout.

The victory undoubtedly puts Wilder, 36, back into the title picture, with ‘The Bronze Bomber’ immediately calling out Oleksandr Usyk after his win. He’s also touted a potential bout with Anthony Joshua after negotiations for his proposed fight with Fury fell through.

But in his press conference afterwards, the American wasn’t in the mood to laud his victory, instead focusing on the welfare of ‘The Nordic Nighmare’: “We don’t know if Robert is going to be the same after this. I just did a job,” he said. “I’m great at what I do but I don’t mean to take people away from the lifestyle they’re living. I’m just trying to support my family as well.”

A tearful Wilder also discussed former boxer Prichard Colon, who suffered brain damage in the ring. He added: “That’s why you can’t play this (boxing), this is serious,” when discussing the dangers of his sport.

After the knockout on Saturday, Helenius ws taken to hospital for precautionary checks before beign discharged and returning to hotel. And on Sunday, he was visited by Wilder, who apologised for the brutal manner in which the fight ended.

“You okay? I love you man. I’m sorry,” Wilder was heard saying as the pair embraced. Helenius replied: “Don’t be sorry. This is your time, I’m out, I’ve been doing this for 25 years. Thanks for the opportunity.”

Indeed, Helenius, 38, has now confirmed he’s retiring after a career spanning 35 professional fights. Defeat to Wilder effectively ended any hopes he had of becoming the first fighter from his country to challenge for a world heavyweight belt.

After winning in Brooklyn, Wilder told fans: “It just feels so good to be back baby, when I came off the plane and set my foot on the ground I felt great energy. I felt the love, I felt the support and that’s all I needed.”