Anthony Mundine didn’t want his son to join the family business. Mundine, the rugby league star turned boxer, made a huge impression on the sport after quitting a stellar footy career to follow in the footsteps of his father Tony.

However, “The Man” wasn’t overly thrilled when his son, Rahim “CJ” Mundine, decided to mix fighting with his own footballing commitments.

“I wasn’t keen for him to do it,” Mundine said. “I’d rather he didn’t at first. But when he made the decision, you just have to support him.”

Rahim is trying to realise his dream of an NRL debut with Wests Tigers this season after a stint with South Sydney but the immediate priority is his light-heavyweight clash at Sydney’s Aware Super Theatre.

And after some initial misgivings, the fullback/pivot will enter the ring with the blessing of the Tigers – and his father. 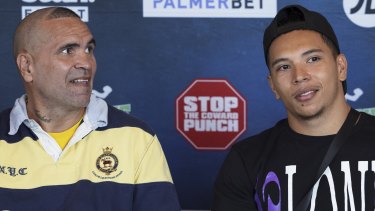 Rahim ‘CJ’ Mundine with father Anthony at the ICC in Sydney.Credit:Brook Mitchell

“He is alright with me doing it now,” Rahim said. “He’s always got a soft spot for boxing.”

Given his pedigree, it’s not a huge surprise that Rahim is the third-generation Mundine to don the gloves even if he did end up on the Hall-Williams undercard by chance.

“You know how the fight came about? We were just training one day, CJ came to watch and wanted to do a bit of pads with his granddad,” Williams said.

“We said, ’Bro, you can actually throw them pretty good! You want to have a fight?

Rahim said that, after some early reservations, he was comfortable carrying the famous Mundine surname.

“When you’re younger, it is a little bit hard,” he said. “It’s both [a blessing and curse], there are pros and cons to it. As I got older, I embraced it. I love it.

“It makes me [work harder], 100 per cent. People say [you get preferential treatment], no matter what you do. People are always going to say something, so you can’t please everyone.

“I’ve got similar speed and footwork. I just try to play my own game, get stuff off every player that I watch and try to implement it in my game.”

Rahim suffered a dislocated hip 12 months ago, a setback which, coupled with the COVID-19 outbreak, resulted in limited game time in 2021. He shifted from the Rabbitohs to the Tigers in search of a clearer pathway to first grade, where the biggest obstacle to his preferred fullback position, Daine Laurie, is his cousin.

“After this fight I want to focus on footy,” he said. “I’m more patient than last year. Last year I was trying to rush my way into first grade.

“Especially after doing a preseason with the NRL, you get a taste of it. It’s my childhood dream. It would mean the world.”

Sonny Bill Williams v Barry Hall headline the eight-fight Turf War event on Wednesday from 6pm AEDT, streaming live and exclusive on Stan Event. New customers can sign up to a Stan free trial and can purchase Turf War on Stan Event for $50 at stan.com.au/event