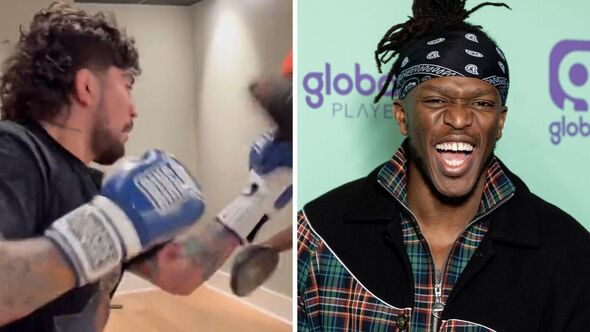 KSI has reacted to Dillon Danis’ latest pad work ahead of their January 14 fight date. The British YouTube star wasn’t too impressed by the skills on display but did admit that it was better than Ben Askren’s.

Askren was famously knocked out by Jake Paul in the first round of their gloved bout last year. After an impressive tenure in mixed martial arts which included ONE Championship and Bellator gold, Askren – who comes from a grappling background like Danis – tried his hand at boxing only to be given a very rude awakening by The Problem Child.

KSI will be hoping for similar successes when he squares off against Danis but the American remains confident that he has what it takes to beat The Nightmare. Posting a video to his social media channels of his latest pad work, a confident Danis sent a message to his rival: “I’m coming KSI. Easy work, easy work motherf***er!”

In response, KSI wrote: “I’ll give it to him…He’s at least better than Ben Askren.” There had been concerns that the fight was in jeopardy after Danis failed to turn up to their launch press conference last week.

MUST READ: Daniel Dubois set for lengthy stint on sidelines as extent of horror injury emerges

According to promoter Kalle Sauerland, Danis did not board his flight to the United Kingdom after contracting a recent bout of flu. Both Sauerland and KSI were not worried about the possibility of the fight falling through but did confirm that they had a backup opponent waiting in the wings – which has been confirmed to be Joe Fournier.

Sauerland added: “From a promoter’s point of view, we have been assured he is in training. I spoke to his management yesterday. But we are ready for everything, in this space you have to be ready for everything like you do in real boxing. I introduced the substitute system into the World Super Series and we will have exactly the same setup here.

“There’s obviously a lot of money at stake as well, it’s a big fight and I’d be surprised if there is a change of start given what they told us yesterday.”