Home » Fighting » ‘Making me look like the coward’: Gallen’s fighting words for SBW

Paul Gallen says he only began boxing to fight Sonny Bill Williams, but believes the anticipated clash will never happen because the cross-code star will wait until his rival is over the hill before accepting the challenge.

Gallen will step into the ring against Manly forward Josh Aloiai on December 10 at the Newcastle Entertainment Centre. It will be Gallen’s first fight since his only professional loss, to Justis Huni in June, and is likely to be one of his last.

The former NSW and Cronulla captain said heavyweight boxing was taking a toll on his 40-year-old body. He said retirement was imminent, raising fears he will depart the sport before a mega-fight with Williams could be made.

Gallen has been baiting Williams for the best part of a decade, but the cross-code star is yet to commit to a bout.

“The reason this all started was to fight Sonny Bill,” Gallen said.

“I can tell you know – and I’ve said this privately to a lot of people over the last couple of years and now I’m telling you publicly – it will come to a point in 12 months or two years’ time when he’ll say ‘Let’s fight’. 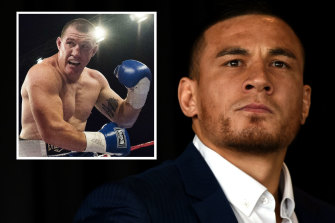 “I’m telling you now, it won’t happen. I’m going to be past it pretty soon and that’s what disappoints me. I’ve told Sonny to his face myself, I said: ‘I’ve signed with No Limit, but I can fight you at any time’.

“That’s exempt from the contract, I told him that. But I won’t fight for too much longer, so unless it happens early next year, it probably won’t happen.

“His reply was, ‘Come on bro, you know you only need eight weeks’. I think he will say it in a year or two or when I’m done, to make me look like the coward.”

Asked if Williams was waiting until he is past his prime to accept the challenge, Gallen said: “I think he is, that’s what he is waiting for.

“Whether it’s him or his manager or the people around him, I don’t know. Unless it happens early next year, it won’t happen.

“I’ve done so much more than I expected when I started my professional career as a footy player and boxer. I don’t need to be doing this for much longer and I won’t be. It’s probably something that everyone is going to miss out on.”

Gallen has achieved just about every conceivable goal during his career; he made 348 appearances for his beloved Sharks, captained them to their first premiership and was a staple of the Australian and NSW sides.

When he turned his attention to boxing, he captured the Australian heavyweight title and won his first 11 fights before succumbing to Huni. Yet whenever he ventures out in public, all anyone wants to talk about is the prospect of a fight with Williams.

“I don’t really mind, I’m not going to retire and think ‘I wish that that would have happened’,” Gallen said.

“It’s just something everyone wants to see. Every hospital visit I go to, every school I go to, everyone says, ‘When are you fighting Sonny Bill?’ Every time.

“They don’t care about anything else I’ve done, it’s only about Sonny Bill. I think people want to see it, but if it doesn’t happen early next year, I can’t see it happening.”

Joey Johns anoints Tszyu as next king of Newcastle

Daniel Bryan isn’t sure being added to Roman Reigns-Edge feud is a great idea, or whether this is his last WrestleMania