Molly McCann strikes with ANOTHER spinning elbow to knockout Hannah Goldy at UFC London, while fellow Liverpudlian fighter Paddy Pimblett cheers her on

‘Meatball’ Molly McCann picked up the 13th win of her MMA career on Saturday night with a first-round knockout of Hannah Goldy following a decisive spinning elbow.

The move is becoming something of a trademark for McCann, after she knocked Luana Carolina out in her last fight with a similar elbow strike.

The win was clearly an emotional one for the 32-year-old Liverpudlian, who followed the knockout by jumping out of the octagon and into the crowd. 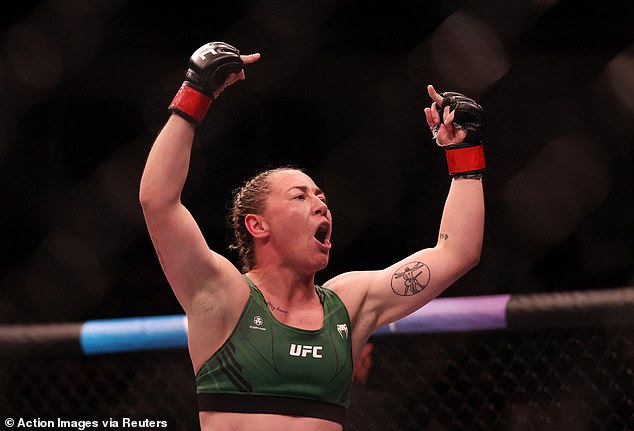 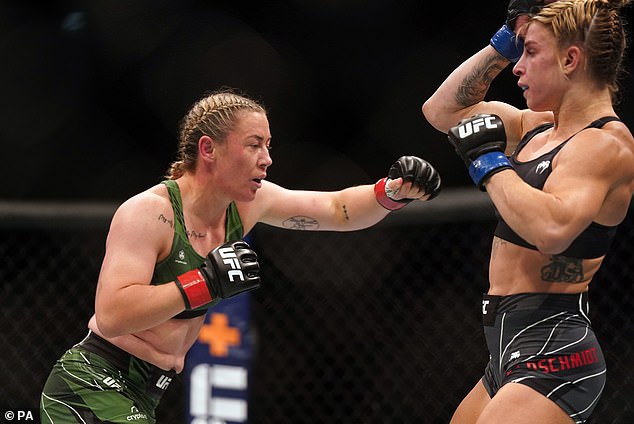 Speaking after the fight, McCann said: ‘I don’t know if I’ve ever seen this in combat sports in the UK – getting behind a female athlete,

‘You are working-class, every single one of you came for me. I appreciate you.

‘It’s those walk-outs, it’s that energy that you bring, which gets you finishes. To see everyone else on this card who didn’t want it as much, they let you down. I will not let you down…I’m not Everton Football Club!’

She then led the crowd in a chant of ‘f*** the Tories’ and was seen shortly afterwards sharing a celebratory drink with fellow fighters Joanna Jedrzejczyk and Mike Chandler.

Another fighter seen enjoying McCann’s success was the visibly-pumped-up Paddy ‘the Baddy’ Pimblett, who punched the air and cheered the win from his dressing room as he prepared for his own fight against Jordan Leavitt.

Pimblett won his contest by submission in the second round, and used his victory speech to deliver a powerful message about the importance of men talking to each other.

Tyson Fury 'wasn't affected by anything' despite complications ahead of Deontay Wilder fight, says Bob Arum