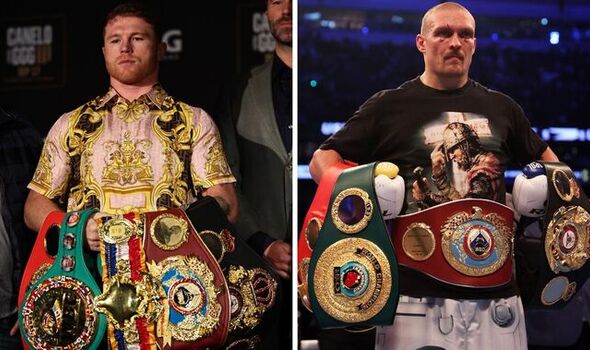 Oleksandr Usyk has admitted that he wouldn’t rule out a fight with former pound-for-pound king Canelo Alvarez at cruiserweight. Before his last fight against Dmitry Bivol, Canelo had expressed interest in going up to the 200lb weight class to face off against WBC champion Ilunga Makabu.

The contest looked set to take place around May or June 2021 after WBC President Mauricio Sulaiman unanimously approved the request but instead, Canelo chose to face Bivol for his WBA (super) light-heavyweight strap. Canelo went on to lose the contest over the twelve-round distance in a dominant showing from his Russian foe.

Since the loss, he has opted to step back down to his natural weight of 168lb to defend his undisputed super-middleweight crown against fierce rival Gennady Golovkin in a third fight on September 17. However, despite, not being entirely keen on the contest, Usyk has said that he will lose 26lb to make a fight happen between him and Canelo if the price is right.

Speaking about the possibility during a recent interview with Parimatch, he said: “To fight Canelo Alvarez, I would have to lose 12kg.  It will be a freak fight. I think firstly I need to do what I have in mind in the heavyweight division, and then maybe arrange such a fight. But the fight with Canelo Alvarez potentially involves big money, so I’m not ruling out the possibility that it will happen.” 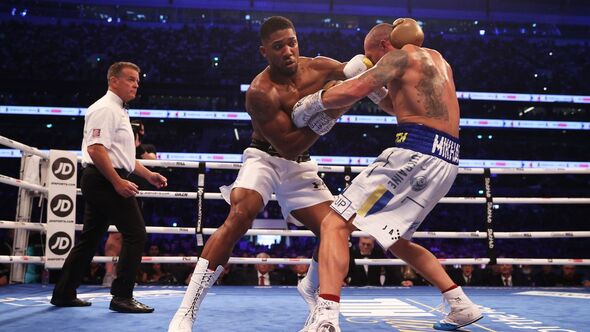 For now though, Usyk prepares for his rematch against Anthony Joshua later this month. In their inaugural encounter last September, Usyk won a comfortable points victory at the Tottenham Hotspur Stadium in London, England.

The pair will now meet each other at the King Abdullah Sport Stadium in Jeddah, Saudi Arabia on August 20 in a fight billed as ‘Rage on the Red Sea’. Coming into the second fight, Usyk appears to be packing on muscle for what is expected to be a very physical encounter, with Joshua adjusting to a more aggressive approach after being criticised for being ‘too timid’ when they first fought.

All of the noise coming out Usyk’s Dubai camp suggests that he has been engaging in ‘brutal’ sparring sessions in the lead-up as he looks to counteract ‘AJ’s’ roughhouse tactics. Aamir Ali, a manager of one of Usyk’s main sparring partners, Nursultan Amanzholov, revealed during an interview with Sky Sports that the former undisputed cruiserweight champion has been sending sparring partners home that cannot keep up with his intensity.

He said: “He [Amanzholov] says there are days when Usyk goes to war with him. It’s not easy to hurt Nursultan but he’s been on the receiving end a few times. But a lot of his heavyweights have been sent back home, if they can’t stay in camp. They can’t keep up.”

Ali added: “He said as soon as [Usyk] came back from Jeddah, from the press conference, the day he arrived back, he phoned up Nursultan who was sitting in his hotel and said to him, ‘I want you sparring today.’ Literally got off the plane and started sparring straightaway and [Amanzholov] said he was in a foul mood. He was in a really angry mood, wanted to go to war.”

Gaethje sends message to Khabib after dominating Ferguson at UFC 249

‘Dude just walks forward like a zombie’: Inside the minds of those who have fought Justin Gaethje