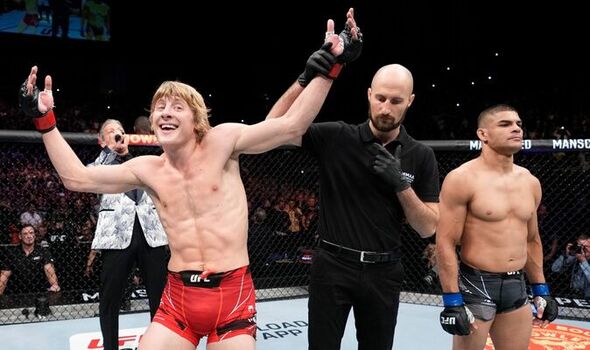 Paddy ‘The Baddy’ Pimblett took just three minutes 49 seconds to get past Mexican fighter Rodrigo Vargas in only his second UFC fight in an epic win in London. Pimblett has been confident all week of what he will eventually become in the sport having achieved superstardom in such a short space of time.

The Liverpudlian has already built a cult following and he appeared to be the main attraction on Saturday night. He bounced his way into the octagon before focusing on the task at hand, knowing the power that Vargas possesses.

And it didn’t take long for Pimblett to find out just how hard Vargas can hit as he got caught by a strike early in the opening round. The Mexican then took Pimblett down, but the 27-year-old was able to work his way back onto his feet.

Pimblett then immediately retaliated with a takedown of his own and locked his opponent in a rear-naked choke. From there, Vargas was in an unbreakable position and soon had to tap, giving Pimblett another impressive victory on his record.

Pandemonium ensued as the crowd went wild with Pimblett rushing around the octagon in celebration. Team-mate Molly McCann, who won her earlier fight with a wicked knockout, quickly joined Pimblett in the celebrations as the pair lapped up the adoration.

The crowd erupted into “Oh, Paddy The Baddy” chants with Pimblett dancing inside the arena.

Pimblett said: “It wasn’t as clean as I liked, but are you not entertained? Lad, see this Arena, the O2 – it’s too small. Get us to Anfield.”