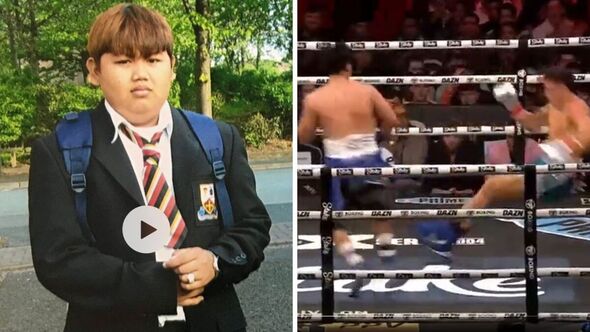 TikTok star Salt Papi aka Busta Breezie has been turning heads ever since he entered the influencer boxing sphere. The Filipino puncher recently improved to 3-0 with an effortless second round knockout win over former professional MMA fighter Josh Brueckner – which has led many to speculate whether Papi had boxed prior to his debut last year.

Some have even suggested that Papi had an extensive amateur pedigree while growing up in the Philippines and was a national champion before moving to the United Kingdom 14 years ago. But the 28-year-old denies ever lacing up a pair of gloves in his youth and has posted a photo of a rather portly young Breezie to shoot down the claims.

Taking to Twitter, he wrote: “This is me when I came to Uk when I was 14-15 years old there’s no way I have 30 amateur fights back in the Philippines #saltpapi #boxing.”

However, that hasn’t stopped rampant speculation online. One fan (@bigsteppa075) tweeted: “Salt papi grew up boxing and has an amateur career, these guys are all lightwork for him bank robbery for him.”

Another (@accountsneakers) added: “Just like how Salt Papi been fighting his whole life since he was 10 he had 60 amateur boxing fights. Obviously he gonna run thru entire misfits. Dude has crazy experience.”

An equally insistent supporter (@DSwv_) posted: “Yeah and salt papi has been boxing. He was an amateur and I’m sure he went to nationals, his brother is a pro and he trains with some elite uk fighters, papi has BEEN DOING THIS, you can’t replicate real BOXING experience.”

KSI has four next fight options after knockout of Temperrr

Taylor breaks silence on quitting after taking one punch from Swarmz

Papi is quickly establishing himself as one of the best fighters in the influencer boxing scene and recently received gleaming praise from professional boxing star Chris Eubank Jr – who was on the broadcast team for his previous outing against Andy Warski. “When I was watching him licking his lips in front of his opponent before the fight, I was like, ‘This kid’s got something,'” said Eubank Jr.

“It became very clear early on with the foot movement, the in-and-out, that he’s been practicing his footwork. And then he hit him with the two-piece combo and the guy went to sleep, incredible.

“If you look at him, he looks like he works a nine-to-five at a cheese factory. So, to see him come out there, moonwalk, dance, lick his lips and then knock a guy out, that’s box office right there.”