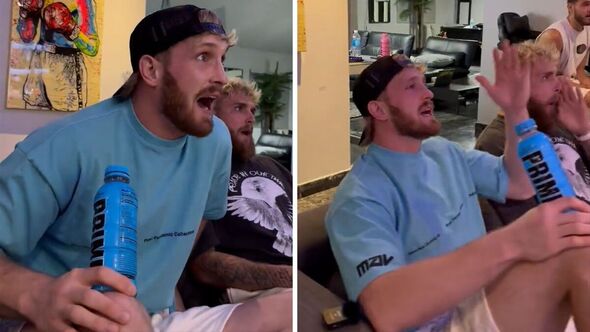 Jake Paul gave a stone-faced reaction to KSI’s first-round knockout of FaZe Temperrr tonight. In a video uploaded by his brother, Logan Paul, Jake can be seen staring expressionless at the screen as KSI landed a heavy 2-3 combination to close out the show.

After his latest victory, KSI doubled down on claims that he will fight Jake at the end of the year in the consensus biggest fight in influencer boxing history.  “I needed to be tested, I need more tests before I reach the final level, the final boss, Jake motherf****** Paul. That’s the end game, that’s the end game ladies and gentlemen. I said I wanted it at the end of the year and I will get it. But before then Joe Fournier, Woodley, Slim, whoever it is I will destroy,” KSI told the DAZN broadcast.

In response to the call out, Jake took to Twitter to fire back: “I love when KSI wins because it gives him more confidence for him to actually get in the ring with me. I also love that I’m your ‘final level’. The peak of your career. Keep going, Haymaker. You will get to the top of the mountain and then Master Splinter will gladly knock you right back down to level one.”

But until then, KSI looks set to take on Joe Fournier in his next fight with the rivals facing off after the final bell. “I said I wanted a KO,” said KSI. “I said I wanted round one and here we are. I want you guys to understand the levels.

“London! Who wants to see him fight a real boxer?” said Fournier. “That might work on a guy that plays video games but not on me, I don’t want you fighting no one else, I’m here.”

Slim outpoints Zanetti in brutal war and calls out KSI

“You want to be next? We’ll see. I’m down,” responded KSI as he shook hands with Fournier before facing off on the stage. KSI and Paul are understood to already be in the early stages of negotiations to make the fight happen in December with both parties keen to get the fight on.

Manny Pacquiao may have boxed for the final time. His legacy? As a once-in-a-lifetime fighter who must be cherished