Kambosos has shot to global boxing superstardom after taking the WBA, IBF and WBO belts from American Teofimo Lopez in a split-decision victory at New York’s Madison Square Garden.

Johnny Lewis, the revered trainer who has guided Australians including Jeff Fenech and Kostya Tszyu to world titles, described the feat as “undoubtedly one of the greatest moments in boxing history in our country.”

Kambosos hasn’t fought in Australia since 2017, the historic win over Lopez marking his seventh consecutive bout abroad. However the 28-year-old Sydneysider has vowed that his first title defence will be in front of a home crowd and sources with knowledge of the situation have told the Herald that negotiations have already commenced to stage a fight in Parramatta early in the new year.

“We’d be quite open to it,” said NSW Minister for Tourism and Western Sydney Stuart Ayres.

“To have a unified world champion defending his belts here in Sydney seems like a pretty awesome experience.

“If they’re up for it, we’d be open to a conversation. Destination NSW is obviously the body whose management and promotions team will need to be engaged with. 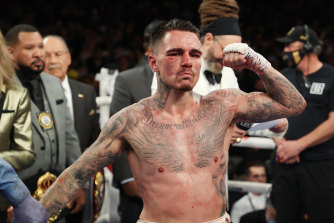 “We’ve had boxing matches in NSW venues, whether they be open-air stadiums or in other locations. We would be more than open to talking to them.

“To have a unified world champion defending his belts here in Sydney seems like a pretty awesome experience.”

Now that he is the unified champion, Kambosos can pick and choose who and where he fights. The Sutherland Shire product has indicated Devin Haney – who holds the only belt not in Kambosos’ possession, the WBC title – is currently his preferred opponent. Haney must first defend his belt against fellow American Joseph Diaz this weekend in Las Vegas. Should Kambosos ultimately take it, he will join Lionel Rose, Jimmy Carruthers and Kostya Tszyu as Australia’s only undisputed champions.

“It’s an exceptional Sydney story,” Ayres said. “It’s almost snuck up on people, but it’s such a huge achievement in the sport of boxing.

“To be able to bring that back onto home soil and have the entire nation behind him, could be quite a special event.

“We’d be quite open to talking to his management.

“[CommBank Stadium] is a great venue for boxing matches, it’s close to the action and great for spectators. I couldn’t think of a better place to defend a world title.”

Melbourne is the biggest competitor for the right to host Kambosos’ next fight. Kambosos is proud of his Greek background and the city also has a large number of people of Greek heritage.

“I want to come back home and fill out a stadium,” Kambosos told the Herald earlier this week.

“I felt Australia behind me, I felt them on my shoulders. I represent that flag with all of my heart, I came over here to the Big Apple and made it happen.

“I can’t wait to bring the belts back home. To have the people be amongst it, to see something special, I look forward to fighting in Australia and having the support there.”