Home » Fighting » ‘Prince’ Charles Martin on unorthodox home-schooling, Tyson Fury’s poker face and not being frustrated by Anthony Joshua defeat (or is he?) 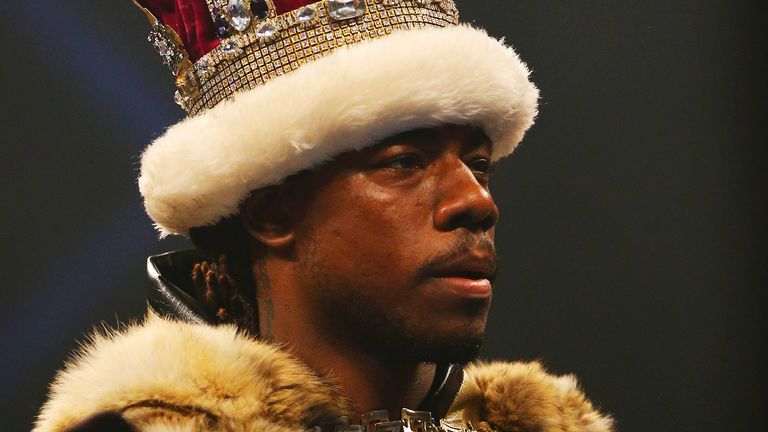 He will never return to a world heavyweight title fight, right? Wrong. The man who walks this earth like a god never lost faith in himself and, four years after “the whole crowd was laughing at me”, he has improbably reclaimed a lofty ranking and another fight with Anthony Joshua is not as ridiculous as it once was.

“That’s pretty dope,” he grins through gold teeth, once again speaking as a heavyweight that must be taken seriously. 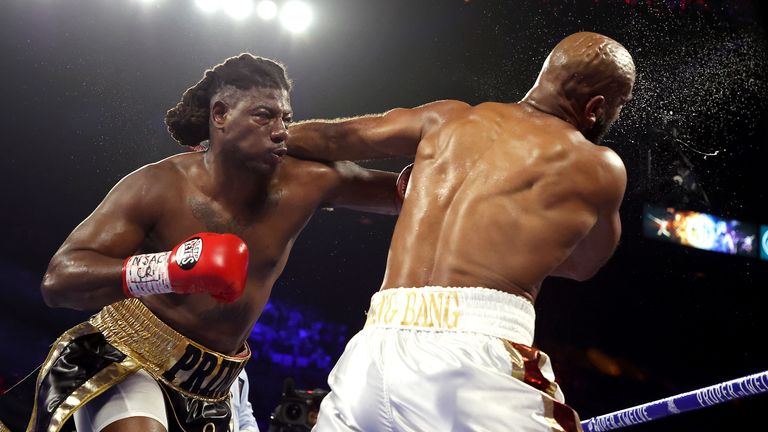 Martin previously told Sky Sports “I was delusional for a while but I have come back to reality” about the crazy period after losing his IBF title to Joshua in two rounds in which he globetrotted, became a rapper and survived a bullet. It has taken him a very long time to recover from a traumatic 2016 which began by becoming world heavyweight champion but ended in a hospital bed with no belt and a few less hangers-on.

The evolution in his mentality is obvious – it first took two years to pin him down for an interview, then about six months, now a day or two. The man with the black sheep tattoo is an outcast no more, he speaks powerfully about his recovery from the gun incident and his responsibilities outside the ring. As a boxer he is the No 2 IBF ranked contender behind only Kubrat Pulev, who will receive a mandatory fight against Joshua next.

But as a stay-at-home schoolteacher? Perhaps improvements could be made.

“I’m showing him the ropes,” he says of his six-year-old. “I’ve got him into boxing. I’m showing how to sit down on his punches. We do activities together.”

“We ain’t got nothin’ like that. They said there might be a package but his mom never sent it, so I don’t think it’s real.” 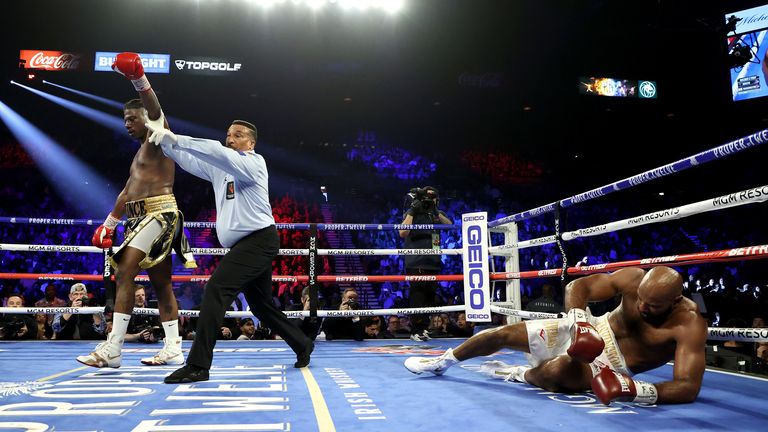 Martin is coming off the most conclusive victory of his career, a sixth-round one-punch knockout of former world title challenger Gerald Washington.

“The last session before the fight I said: ‘I’ll knock him out with the left cross’. My manager said: ‘You won’t’. But it presented itself and I caught him.

“That can happen to anybody – but it happened to Gerald Washington.

“My sweetest punch? I landed a hook on this guy in Louisiana. I threw a straight left at his chest, a decoy just to keep him still, then I hit him with a hook. Boom! There’s nothing like knocking someone out with your opposite hand with a hook or a right uppercut.”

Victory over Washington was on the undercard to Tyson Fury’s one-sided dismantling of Deontay Wilder, so Martin spent time in the company of both men in the days prior. He was also backstage when Wilder began his ring-walk wearing a costume to commemorate Black History Month which he later claimed would tire out his legs and contribute to his defeat.

“He said it weighed 40lbs? Why would you wear that? They didn’t bring it to him on the day of the fight,” Martin chuckled.

‘Prince’ Charles is no stranger to elaborate ring-walks himself. Against Joshua he came in dressed as a monarch with a crown and a throne, just as Fury famously did before beating Wilder.

Martin continued about Wilder: “He knew the suit weighed 40lbs.

“So why wear it? That’s his fault. Ain’t nobody’s fault but his.

“It’s stupid to wear 40lbs of weight on your body when you’ve already got skinny legs. Be smart. Who does that?

“We’re cool but I’d fight any of the top guys.”

Martin’s ring-walk attire on the same night was much more low-key, like the man himself these days. It was a robe inscribed with the names of the nine victims in Kobe Bryant’s helicopter crash.

“I wanted to do something for the victims. It was so sad, his daughter going down too. Pretty bad.” 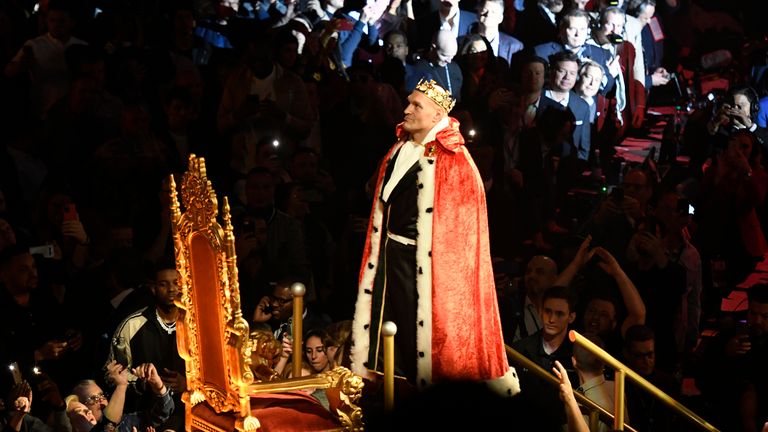 Martin lights up when talking about new WBC champion Fury, the man who clambered into the ring to congratulate him when he became IBF champion four years ago.

Fury’s backstage antics before destroying Wilder were of interest: “He was dancing around, smiling. He’s a confident dude and a big lad who can fight and talk. That’s great, man.

“You don’t show people your hand even if you are nervous. You have to have a poker face.

“Everybody deals with nerves differently. If you didn’t have nerves you would get knocked out in the first round. It’s impossible not to have nerves – you need to be alerted, to have adrenaline. But you also need a great poker face. When you don’t handle your nerves correctly it can lead to feeling flat or tired in the ring, like you’ve already had 10 fights.”

Martin’s own pre-fight mentality is in stark contrast to Fury’s: “I may appear to be quiet to other people but it’s focus. You think about the fight, play it over in your mind 1000 times.

“Think about how you want the fight to play out. Seeing it before it happens. It is a form of meditation. Meditation isn’t about closing your eyes or going into a dark room.

“As an amateur we had doctors who were part of the camp that taught us breathing techniques – when you know how to do it, it drowns everything out. It helps with everything, with your peace of mind.

“If you’re not having a good day then meditate and visualise yourself conquering your day.” 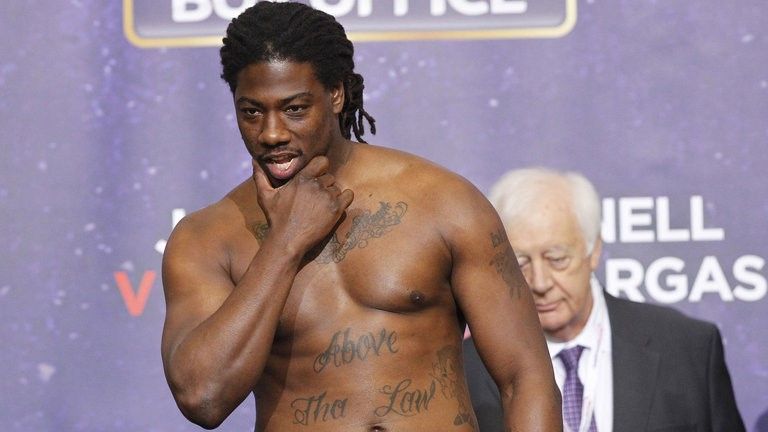 It is always difficult knowing when or how to mention the Joshua fight when interviewing Martin, whose chilled mood suddenly changes when he is finally asked.

“I don’t want to talk about that anymore,” he snaps, and swears. The memory of his first loss has riled him. You sense he is annoyed by the lasting reputation that he carved for himself on that disastrous night in London.

He barks back: “No it doesn’t!

“He knocked me down twice but I would knock him out. There wouldn’t be no referee stoppage. KO.

“I know what he’s about.

“He hit me with clean shots and I was laughing at him. I was like: ‘What the hell?’

“The whole crowd was laughing at me. I was embarrassed. I wasn’t hurt at all.”

His manager Mike Borao chimed in: “We are all in limbo. Joshua may take a bigger fight [against Fury]. If the title is vacated then Charles would fight Pulev for it. Or if Pulev gets injured then Charles is next in line because the mandatory would still be due. There’s a chance, not a huge one, that Charles could fight for the IBF title.”

Would Martin come back to London?

“I don’t want to do that,” Martin replied. “Joshua can meet us on some different ground, know what I mean? He got destroyed when he came out of his place.

“Praise him all you want but as soon as he left his comfort zone? He got messed up.

“He can’t weather a storm. He just drops.

“He hasn’t proved himself. He wanted to get all the American fans, be the next Mike Tyson, but it didn’t happen.” 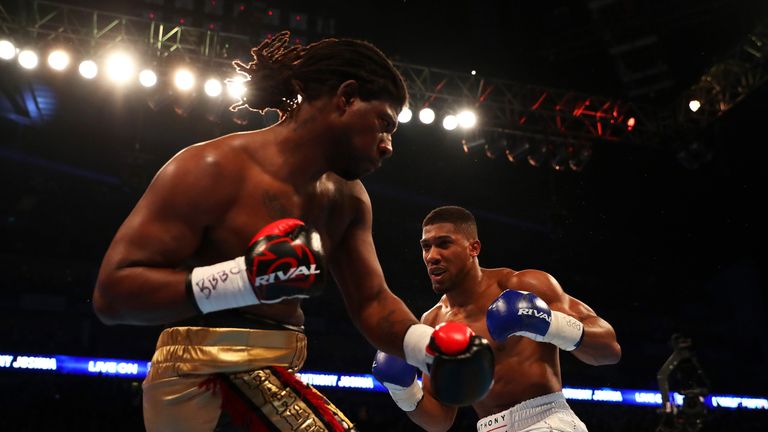 Martin was surprised Joshua lost his US debut to Andy Ruiz Jr: “I didn’t expect it but I saw something. He didn’t look like the guy I saw in the UK walking around with his chest out. He looked susceptible. He looked vulnerable. He didn’t have that flicker in his eye. He was just going through the motions, his confidence was deflated for some reason. Who knows why.

“But boxers know facial expressions. And he didn’t look confident at all.”