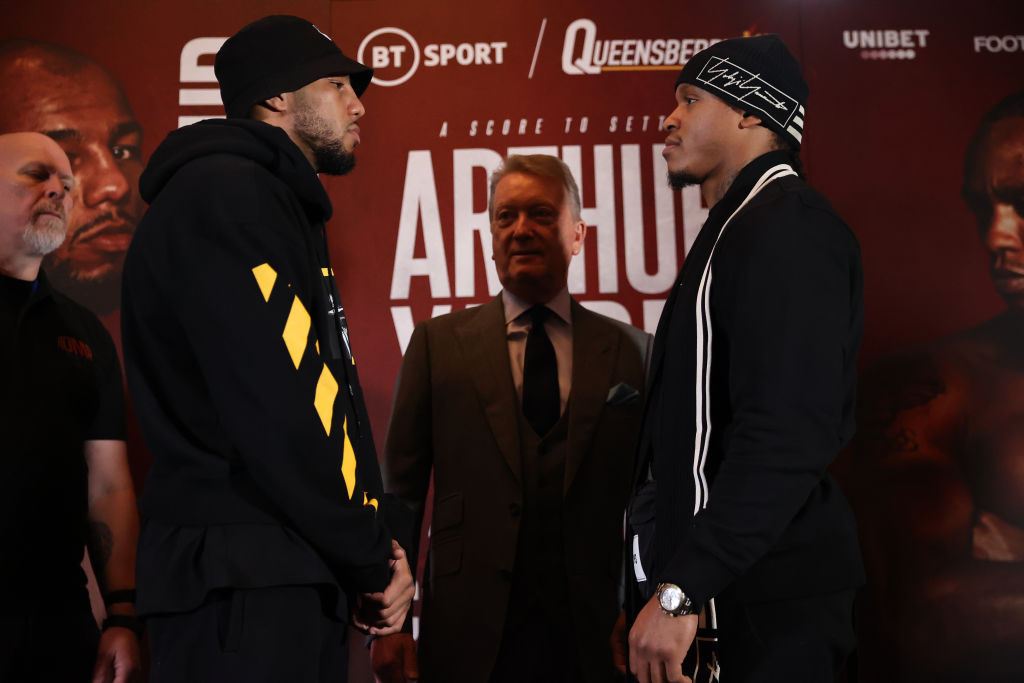 In his latest column with Metro.co.uk, the British boxing legend previews a huge light-heavyweight showdown, reacts to confirmation of Amir Khan vs Kell Brook and reflects on Jack Massey’s title win.

Arthur has perfect style for Yarde

Anthony Yarde could find himself in a difficult spot if he comes up short against Lyndon Arthur again on Saturday. I’ve always liked Yarde from the minute I met him and I always liked his style. But I think Lyndon has his number, style-wise. It is a big fight for him.

You wonder if he has maybe lost a bit confidence in himself. Not only because of the defeat in the first fight last year and the loss to Sergey Kovalev before that, but also the factor that if loses again, he might be thinking to himself he has nowhere to go. It will be tough if he loses this.

Lyndon has that fantastic left jab which is perfect for someone with the style that Yarde has. Lyndon just kept putting that jab on him but I think if he puts a few more backhands into the mix as well it will cause trouble.

I do rate Yarde as a fighter, I just don’t think he has the style to beat Lyndon. Yarde can do that shoulder roll brilliantly. I fought the best shoulder roller around in Floyd Mayweather. They want you to hook, hook, hook so they can glance it off and block that right hook to the body or that left hook to the body. It’s perfect for hooks. But it is not perfect for those straight shots and that is traditionally what Lyndon throws. It is a perfect approach for him to deal with and I just think he has Yarde’s number.

Yarde can show something different

But Yarde does have much more in his armoury that that typical shoulder roll style, you would like to think he has gone and worked on different things since that last fight so he might surprise us. I just think from a boxing point of view, Lyndon has got the style to beat him and will do it again.

At the end of the day, Lyndon knows he will have to do a bit more this time. He will have his right hand back too. He is going to have to assume Yarde is not just going to sit there on the end of the jab, he will be moving and applying the pressure.

Lyndon will have been working on another game plan, for sure. I wouldn’t say the fight was boring last time but it was more of a chess match than a scrap. Yarde has got to ensure that doesn’t happen this time, he has got to make it a fight. And if he does that by putting the attack on more, Lyndon is going to have to be able to react to that.

I think when someone is coming rumbling forward and putting the pressure on you, the best way to deal with that is a backhand to keep him off you. If Yarde does come forward more like that, Lyndon is going to have to pick him off with that jab and drill him with that backhand to get his respect and stop him in his tracks.

It is a very interesting fight and it is massive for both of them. There are lots of big fights for the winner on the world stage after this.

Khan vs Brook still a huge fight for British boxing

It is not too late for Amir Khan and Kell Brook to deliver the classic we have been waiting so long for. It will still be a good fight in my book and they will sell out in Manchester on the night next February.

Even though both have seen better years, it is not as if one is still in the prime and the other is past their prime. Both are at the same level, they are equally matched in the sense they are in the twilight of their careers. Both will probably have slowed down a bit but to be honest, that could make for a better battle.

It’s unlikely to be a chess match where both are moving in and out and keeping out of the way. What we might find is that if they’ve slowed down, that means they are going to hold their feet a little bit more, sit in that little more and scrap.

For me, it is just as good a fight as it would have been had it happened five years ago. They are in the same boat. I don’t understand the criticism over it. Would you rather watch Floyd Mayweather vs Logan Paul on Box Office or Amir Khan vs Kell Brook on Box Office? I know what I would f*****g rather do!

Khan’s speed still as good as it was

Amir is known for getting caught a few times in his career, that takes its toll. When I fought Floyd Mayweather, Juan Lazcano and Manny Pacquiao, I would have much rather had the chin I had when I fought Kostya Tszyu three years earlier! Over the years, it chips away and eventually it goes. So Kell is well capable of knocking him out.

But if anyone is going to hold their speed out of the two of them, it’s Amir by a mile. Kell might suffer with the speed but like a lot of fighters who have come up against Amir, they only need the one big shot to get the win. There are a lot of scenarios that could play out here but ultimately it was a 50-50 five years ago and its a 50-50 now.

Massey ready to step up

What a night it was for Jack Massey last week on Fightzone, knocking out Bilal Laggoune inside three rounds to win the IBO cruiserweight belt.

I’m delighted for Jack, it’s another world title back in Manchester. We all support each other, especially the lads down the Phoenix Camp, Rob Rimmer has done a superb job done there.

We have to give Dennis Hobson the credit for getting Jack the opportunity. There will be tougher fights to come for Jack.

But I remember Carl Thompson and David Haye fighting for that same title a few years ago. David went onto become cruiserweight and heavyweight champion of the world. I fought José Luis Castillo for my IBO belt to get a crack at Mayweather, it opens the door for some big league fights.

There is a long list of previous champions who have used the IBO title as a stepping stone and gone onto great things and I think Jack can do the same.

Get all the Fightzone action – visit www.fightzone.uk to subscribe