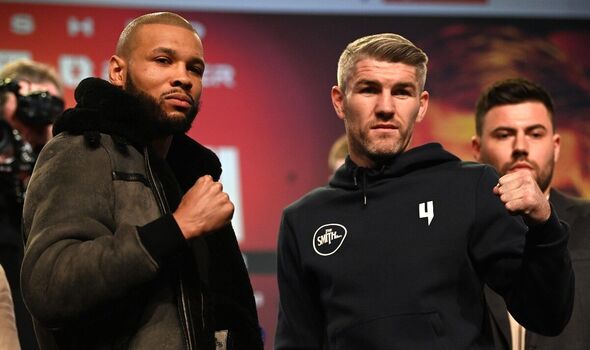 Sky Sports were forced to apologise after homophobic comments were made between Chris Eubank Jr and Liam Smith during their pre-fight press conference. The pair are set to face off in Manchester this weekend in an all-British middleweight grudge match.

There have been a number of verbal spats between the pair in the build-up to the fight but tempers spilled over on Thursday as they met for the press conference. And Sky Sports presenter Anna Woolhouse was forced to apologise for comments at the end of the broadcast.

She said: “We would like to apologise if you have been offended by the offensive language, personal and homophobic remarks made up on stage.” The comments in question were made by both men during a heated exchange where Smith began questioning if Eubank Jr had a partner.

During the press conference, Smith shouted: “You go on about girls, has anybody in this room ever seen you with a girl? You got something to tell us? You are 33 and you said on the programme you want kids. This is for no laughs I am just asking, do you want to tell us something? You are putting up pictures with Neymar in limousines. No-one in this room has seen you with a women. If you are happy just tell us; it isn’t a dig. You have to have a women to have a kid.”

Eubank Jr later responded: “Listen, my private life is my private life. That is irrelevant to the boxing but I am happy and comfortable. What would you like to know Liam? If you want to get personal, talking about being gay? I’ve been told you cheat on your wife. I’d rather be gay than a cheat. If you would like to ask me a question just slide into my DMs.”

For the latest news and breaking news visit: express.co.uk/sport/football]

Stay up to date with all the big headlines, pictures, analysis, opinion and video on the stories that matter to you. Follow us on Twitter @dexpress_sport – the official Daily Express & Twitter account – providing real news in real time.

Can Kubrat Pulev shake up the world at Wembley Arena?