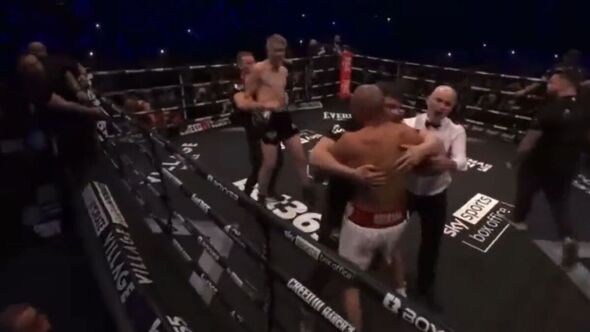 Liam Smith’s trainer, Joe McNally, has been praised for his quick-thinking and selfless actions after the Chris Eubank Jr fight. McNally stepped in and stopped Eubank Jr from punching Smith in the aftermath of his fourth-round stoppage loss, as the still badly dazed 33-year-old marched forwards unaware that the contest had been waved off.

Rather than going on to celebrate with his fighter, McNally stayed with Eubank Jr until he was sure he was alright, in one of the classiest moves of the year so far. Rushing to social media to praise the renowned coach, boxing fans heralded McNally’s fine display of sportsmanship.

“Watch Liam Smith’s trainer Joe McNally rush in from the opposite corner to help Chris Eubank Jr and tell him the fights over. Joe protected Eubank Jr’s health instead of celebrating with Liam. Amazing sportsmanship,” wrote @BoxingKingdom14.

“Massive shout to Joe McNally grabbing Eubank when it got stopped and he stumbled over to Liam, thinking fight still going,” tweeted @PaulReady.

“Joe McNally, definitely a trainer for the future and at the top level. He single handedly saved Eubank from causing a storm there. What a man. Even waited to see Eubank was okay before celebrating. Ended in a very sporting manner. Hats off to all. #SmithEubankJr,” added @Davisb5ksc

Meanwhile, former two-weight world champion Carl Frampton also commended McNally for his class: “What about Joe McNally at the end? What a man.”

In the lead-up to fight night, both men’s conduct was placed ‘under consideration’ by the British Boxing Board of Control after an ugly exchange in which homophobic comments were made by Smith at their final press conference on Thursday.

Thankfully, though, the pair showed a great deal of respect to each other once the dust had settled as they embraced in the centre of the ring. Taking to the mic after the conclusion of the grudge match, Eubank Jr was quick to congratulate his rival on his upset win. “Listen, big congratulations to him,” he said. “I felt like I could have gone on, but he caught me with a great shot.

“The build-up was the build-up, it got a bit ugly in the end, I regretted that, and I respect you and I respect your family. I will return. If the fans want a rematch, we can get it on at Anfield but big respect man, I appreciate it.”

Eubank Jr is understood to have a rematch clause in the contract and is looking likely to exercise it judging from his words during the post-fight interview. Smith went on to acknowledge the clause and affirmed that he will honour the agreement.

Tyson Fury claims Anthony Joshua would be his EASIEST ever opponent