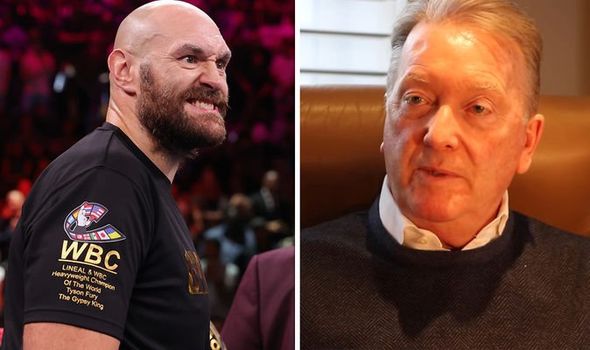 Tyson Fury’s next fight date has been confirmed Frank Warren as the promoter offered an update on the boxer’s potential bout with Dillian Whyte. Fury remained in America following the third fight of his trilogy with Deontay Wilder.

Fury defeated Wilder in October and has not fought since.

He is now in Morecambe Bay preparing for a possible WBC fight with Whyte.

The WBC have ordered the 33-year-old to defend his world heavyweight title against Whyte in a long anticipated battle.

And now, Warren has suggested when the fight could take place.

However, he would not divulge on whether it would happen in the United Kingdom or in America.

Warren told iFL TV: “Tyson wants to fight be the end of March. As a team we’re looking at other situations as well.

“Whatever happens he will fight on March 26, that’s what the objective is.”

When asked whether the fight will take place in the UK or America, Warren replied: “I’m not going to say where it is.

“We do have a date here but it could be somewhere else. The fact of the matter is that’s when he wants to fight.”

Fury has been training with fellow heavyweight Joseph Parker to keep himself fit ahead of a proposed fight.

Parker told the Sun: “Tyson’s a different beast altogether. I’ve trained alongside him and I know the levels. Out of everyone I’ve seen and trained with, he’s up here.

“After the Vegas fight, we let loose – Tyson and I – it was the best time.

“We went to some club, he got on the stage, it was crazy. Then we came back to Morecambe, let loose again and then camp started.

If Fury fights Whyte and is victorious, he is expected to face the winner of Anthony Joshua’s clash with Oleksandr Usyk.

Usyk defeated Joshua in September, but the British boxer triggered a rematch clause in their contract and so they look set to face off again in spring.

Joshua vs Pulev: Anthony Joshua’s plans for heavyweight dominance were left in disarray by Kubrat Pulev

Hopkins, Mosley to wait a year for HOF induction