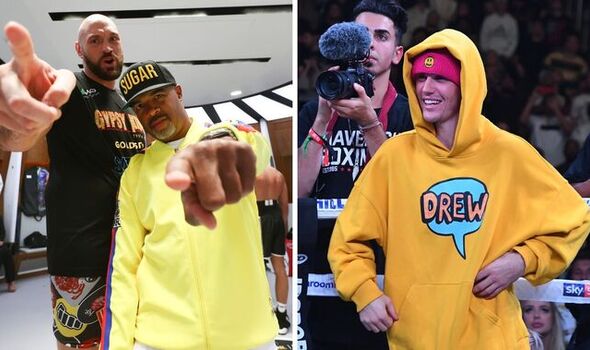 Tyson Fury’s head trainer SugarHill Steward has stated that he would be open to training Canadian pop star Justin Bieber ahead of his new movie role. Bieber is being targeted as the lead actor in a biopic about Ukrainian boxing legend Dmitriy Salita.

Steward believes he is the perfect man to prepare Bieber properly and has even offered him sparring with world champion boxers.

“I would definitely have Justin Bieber in camp because Emanuel [Steward] was teaching Eminem so it’s no different. I like to teach, and it doesn’t matter who I teach at this point. I just like teaching, I enjoy it,” he told Press Box via Betway.

“I would be very open to not only teaching Justin Bieber how to box but teaching him how to knock guys out. I think he’d get on well [in the gym]. He’s a successful entertainer so he’s worked hard to get to this point. So being in camp would not be anything less than he’s been doing his whole life. In my training camp, we also have fun. It’s about having fun. It will be hard work, but it’ll be fun. It’s a family-oriented gym.”

Joshua attempting to overcome ‘mental problem’ ahead of Usyk rematch

Inoue has house broken into just hours after Donaire victory

When asked whether he would let Bieber spar Fury, Steward responded: “I don’t know about Tyson Fury, but I’ve got some other world champions Bieber can get in there with. Definitely, Bieber can learn something from being in the ring and sparring with champions.

“That’s something we’ve always done growing up. We’ve had world champions boxing with pure novices, doesn’t matter. It’s not about beating them up, it’s about teaching them. And at the same time, the champion can work on something himself.”

Bieber has been boxing on and off for a few years now and can be seen displaying his skills in the music video of his popular song Anyone. The pop star has reportedly been upping his training intensity recently with ‘secret boxing lessons’ to prepare for his latest acting gig. And the film’s screenwriter, Gregory Allen Howard, is apparently extremely impressed by the musician’s boxing ability

“From what I’ve seen of Justin Bieber, he has the talent and the boxing skill to crossover from an entertainment background into boxing – he has the ability to become the next Jake Paul,” Howard told Vegas Insider.

“I saw Justin spar and he’s got skills. I’m not telling you he’s ready to be the middleweight champion of the world but he’s not bad. The hard thing in a boxing movie is to move like a boxer. Justin Bieber apparently was taking some lessons; he was really quite credible. There’s a little clip of him on YouTube or something. He’s very credible as a boxer. “