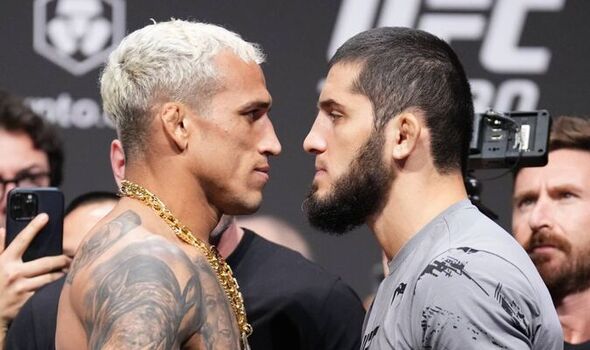 A host of UFC fighters have predicted who they believe will become lightweight champion on Saturday night when two of the top fighters in the division face-off for the belt, with Charles Oliveira facing Islam Makhachev. Oliveira, who was stripped of the belt after missing weight by just half a pound ahead of defending his belt against Justin Gaethje, is aiming to recapture his old belt.

In many of his previous wins, Oliveira has been the betting underdog, and that trend continues in this bout against Makhachev – who is currently on a 10-fight win streak.

Khabib Nurmagomedov’s trianing partner, Makhachev has looked dominant in many of his last bouts – using similar tactics and approach to his style as Nurmagomedov. But whilst the bookies side with the Dagestani, it’s fair to say a majority of fighters are siding with the Brazilian, as many have given their predictions ahead of UFC 280.

Michael Chandler said: “Charles Oliveira gets the job done. I think Islam, not that he’s not great and may be a future champion – but what Charles has done in his last fights is nothing short of amazing. He’s the legitimate number one lightweight on the planet.”

Paddy Pimblett also picked Oliveria, as he explained: “I think Charles wins within three, simple. They are both unbelievable but Islam hasn’t fought the calibre of opponent that Charles has. Oliveira all day.”

Leon Edwards declared: “Islam is a great wrestler, but Charles’ confidence is so high. I wouldn’t want to call it!”.

Beneil Dariush and Jai Herbert also picked Oliveria to win, though some did pick Makhachev.

Drew Dober said: “Islam, he’s so hard to find any weaknesses in his game. I put my money on him, he’s so talented,” whilst Ludovit Klein said: “Islam will win but it will be a hard fight.”