WHEN IS THE MASTERS?

The 84th edition of The Masters Tournament will be held from Thursday evening until Monday morning AEDT. 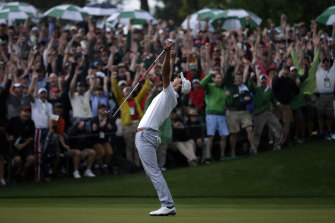 A jubilant Adam Scott celebrates his 2013 Masters win on the second play-off hole at Augusta National.Credit:AP

Fortunately, some things never change. The Masters will be held at its traditional home, Augusta National, in Georgia.

WHERE CAN I WATCH?

The Masters will be live each morning on Nine from 5am, screening on the Gem channel. Every shot will also be shown on Fox Sports and Kayo. 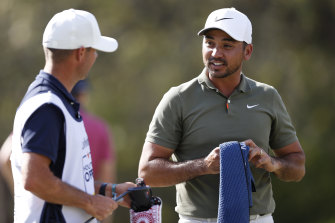 Jason Day again finds himself in reasonable form heading into a major.Credit:Getty

WHO IS THE DEFENDING CHAMPION?

The COVID-19 pandemic means Tiger Woods has had to wait longer than any winner since 1942 to defend the title he won for the fifth time last April. Byron Nelson didn't get the chance to attempt to add to his victory that year until four years later due to World War II – there was no tournament held between 1943 and 1945.

WHO MAKES UP THE AUSSIE CONTINGENT?

Australia's sole Masters champion, Adam Scott, will look to add to his 2013 success. He will be joined by Jason Day, Marc Leishman, amateur Lukas Michel and Cameron Smith.

ARE WE IN WITH A SHOUT?

Who's to know? Only a fool would write off anyone who has tasted success at one of the game's most unforgiving courses, while Day was looking good again at the Houston Open over the weekend only to fade on the final day and finish tied for seventh. The 2015 PGA Championship winner was also in contention at this year's of that tournament in August, leading midway through the final round before finishing tied for fourth behind first-time major winner Collin Morikawa. The bookies have him as the best Australian hope at $31 with Scott at $41 and Smith $51.

WHO ARE THE FAVOURITES?

Bryson DeChambeau, probably the most talked-about golfer on the planet this year, is at $9 after his US Open win. World No.1 Dustin Johnson, still chasing that elusive second major, is next best at $10 with Jon Rahm, Justin Thomas, Brooks Koepka, Rory McIlroy and Xander Schauffele all $15 or better. Woods might attract some attention at $29. 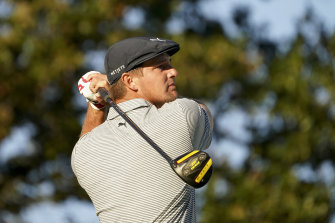 US Open champion Bryson DeChambeau is favourite to add a second major at Augusta.Credit:AP 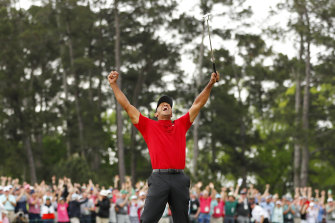 Tiger Woods celebrates after sinking his putt on the 18th green to win during the final round of the Masters in 2019.Credit:Getty