EXCLUSIVE: Rory has a lot of scar damage… Everyone thought McIlroy would win a dozen majors, now he’d be ecstatic to get a fifth, says Nick Faldo, as the Northern Irishman once again struggles at Augusta

Sir Nick Faldo is waiting beneath the boughs of the majestic old oak tree that stands in front of the clubhouse at Augusta National.

Its branches seem to go on for ever, stretching and weaving towards the first tee, defying gravity and defying time, gazing out over the manicured course that falls away beneath it in valleys and curves, listening to the conversations that take place in its lee.

The balm of tradition and of timelessness is everywhere at Augusta and Faldo is comfortable here. He is easy company, generous with his time and happy to talk, acknowledging well-wishers as they drift past him. 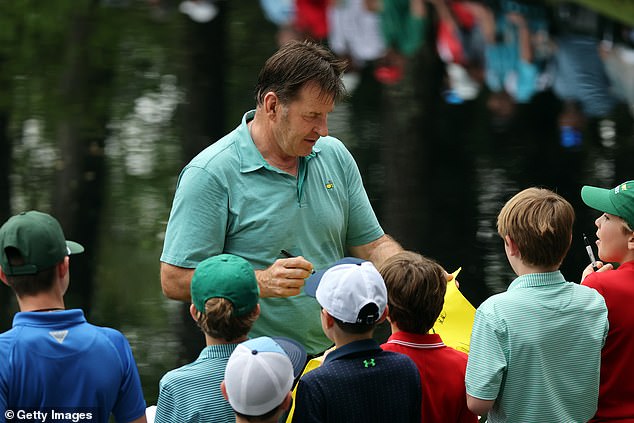 He remains a keen-eyed observer of the game, too, a much-admired analyst for American network CBS and someone who has an instinctive feel for the motivations and the struggles that drive men like Augusta’s returning king, Tiger Woods.

That timelessness is one of the qualities that makes Augusta National such an alluring and immersive place to watch sport.

Time, like the oak, has stood still within its walls. But when Faldo, the greatest European golfer of all time, a man who won the Masters on three occasions, begins to talk, he speaks about the scars time leaves on a golfer here among the azaleas and the magnolias and the havoc it can wreak. 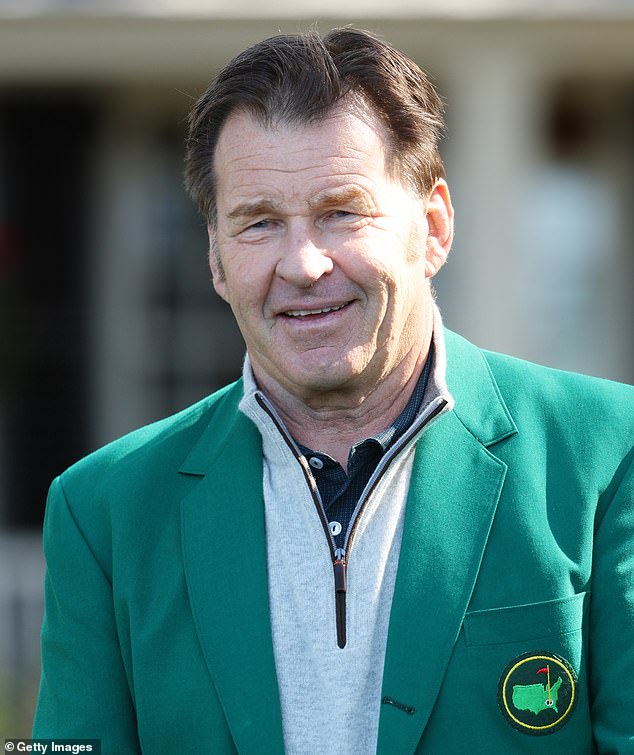 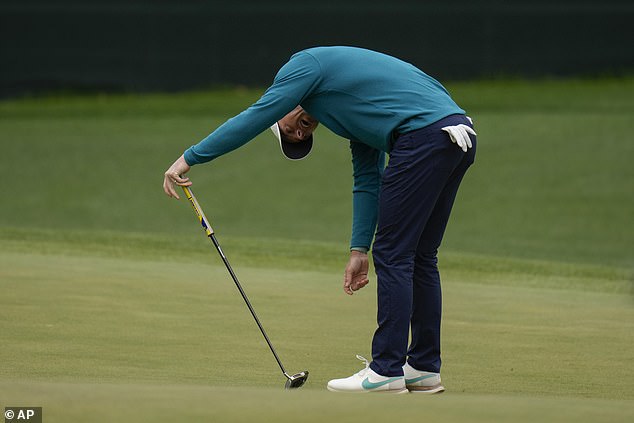 He talks, in particular, about Rory McIlroy, the man who most assumed would breeze past Faldo’s record of six major victories and usurp his crown as Europe’s greatest. 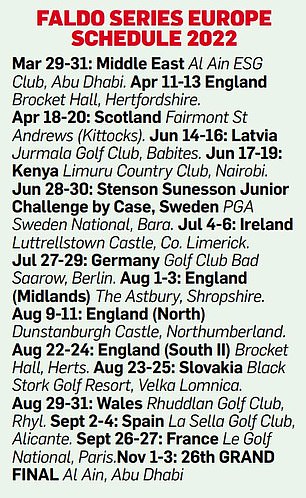 The question back in 2014, when McIlroy won his fourth major at the age of 25, was not if he would overtake Faldo but how close he might get to the marks set by Woods and Jack Nicklaus. Eight years on, he is still stuck on four.

Time has left its scars on McIlroy, too, who is playing Augusta for the 14th time this week. Now 32, he had a golden chance to win here in 2011.

He led by four strokes going into the final round and was still set fair as he started out on the back nine but dropped six strokes on the 10th, 11th and 12th and fell out of contention. His fourth round was an eight-over par 80.

‘A lot of it gets registered,’ Faldo says, as he thinks about McIlroy’s career sweep.

‘Everybody says they wish they were 18 again. At 18, you are coming here and all your pictures are clear. “What’s my vision? Go and play, go and enjoy it”. Ten years on, it gets harder as you store up all those images in your mind. Learning to play without fear is the secret to any sport.

‘A guy walks up to take a penalty in football and he has to deal with that. I was watching the college basketball, the Final Four, on the television the other night and the guy was a 93 per cent shooter from the free-throw line and he misses six for six. That’s your mind.

‘You miss a couple and you have to deal with it right there and then. It’s the same when you are here at the Masters.

‘You face the fears on every shot at Augusta. When Rory was younger and he surged to all those major victories in the space of a couple of years, everybody was like “he is going to win a dozen majors”. Now he’s going to be ecstatic if he can get to five. He has got a lot of scar damage.’ 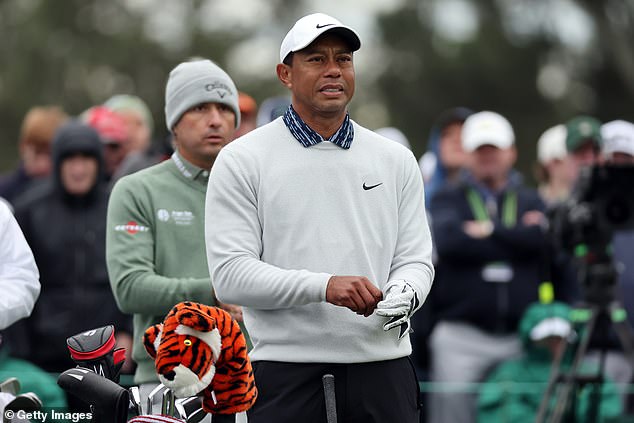 The links between Faldo and McIlroy go back 20 years. In 1996, Faldo started the Faldo Series, a string of junior tournaments designed to provide more opportunities and pathways for promising young golfers to progress.

In 2003, when he was 14, McIlroy played at Brocket Hall when the Faldo Series staged its European grand final. McIlroy is a three-time winner of Faldo’s global development programme. 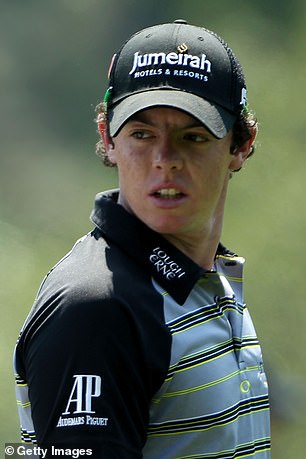 McIlroy talked eloquently last week about the passage of time and how strange and beautiful it felt coming to this edition of the Masters with his toddler daughter, Poppy, and looking forward to competing in a Par Three Contest that he once viewed as an ‘afterthought’ but now ‘sort of becomes the highlight of the week, in a way’.

It looked yesterday morning, certainly, as though the Masters has eluded him for another year and that his wait for another major will go on. At the close of Friday’s play, he was 10 shots behind runaway leader Scottie Scheffler. He had not played badly in very difficult conditions but he had not excelled. That has become the norm.

‘It’s trust,’ Faldo says, of the key to greatness. ‘Our game is so knife-edge. We are either on a spiral going up and we think we can do anything, playing great. But it is so delicate and if something bad happens, then all you can see is down. Our trust is paper-thin.

‘When you have got it, when you have the trust, you think “Good luck guys, beat me if you can”. When you haven’t got it, you think “How the hell do I score like I used to?” That’s the greatest feeling for any sportsman, when you think you have got your game where you want it, where you go on a golf course and think “I’m the boss, I’m in control”. It’s ridiculous our sport. It’s back to trust, self-belief. Self-belief is the most important thing. If you lose the self-belief that you can do anything, that’s when it gets difficult.’ 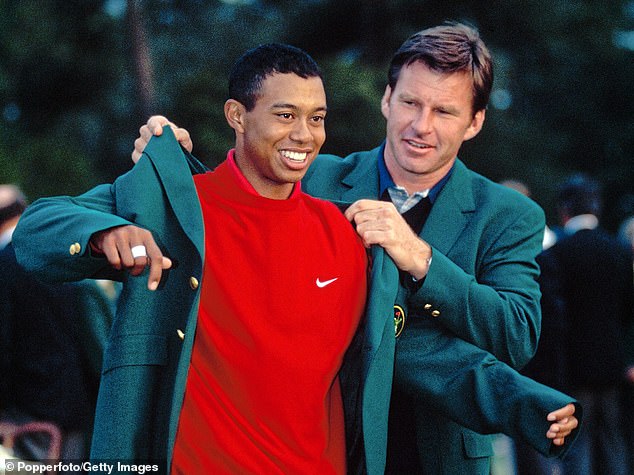 Faldo went through it himself. He won his third Masters — his sixth major — in 1996, the last before the Tiger era began, but after that his game went into decline. He missed the cut at Augusta in each of the following three years and the belief and discipline of a man who once made par on every one of the 18 holes of his final round to win The Open at Muirfield in 1987 deserted him.

‘I had some equipment changes which were wrong for me,’ Faldo says. ‘I got caught in that transition of coming from old school — persimmon woods and balata golf balls and blade irons — and the early days of the new equipment and it didn’t work for me. I struggled and by the 2000s I was still struggling. I was trying to get one more really great performance to call it a day and it didn’t happen. I ended up in TV by 2005.’

For all Faldo’s reverence for the greats of the past, what gives him more pleasure than anything in the game is giving talented young golfers the platform to follow their dreams. The Faldo Series has created access to the sport for a younger audience through grass-roots initiatives at its tournaments. ‘It is my way of paying it forward,’ Faldo says. In the 26 years since its inception, the series has given opportunities to 50,000 youngsters to progress.

Maybe one of them will be the world’s next dominant player. Faldo smiles at that idea as he thinks of the mania that surrounded the return of Woods to the tournament this week.

‘All athletes stop running, jumping and chucking it one day,’ he says. ‘Tiger is going to stop one day. There is going to be a transition and the transition is fine because the Tour has got an awful lot of good characters and great players. Right now there is not another Tiger Woods but one day there could be.’