Ian Poulter has poked fun at his stand-off with PGA Tour star Billy Horschel, at the BMW PGA Championship turning the original video into a parody clip. It appeared that both Poulter and Horschel were engaging in a heated discussion on the putting green at Wentworth this week.

It is no secret that the pair lie on different sides of golf’s ongoing civil war, with Ian Poulter one of LIV Golf’s poster boys, whilst Horschel has remained loyal to the PGA Tour, making his feelings on the Saudi-backed Series more than known.

Ahead of this week’s tournament, defending champion Horschel slammed the return of 18 LIV golfers to the DP World Tour flagship event. Hitting out at his former fellow PGA Tour members he said: “Although Lee Westwood and Ian Poulter have been stalwarts on the European Tour, I don’t think those guys should be here. 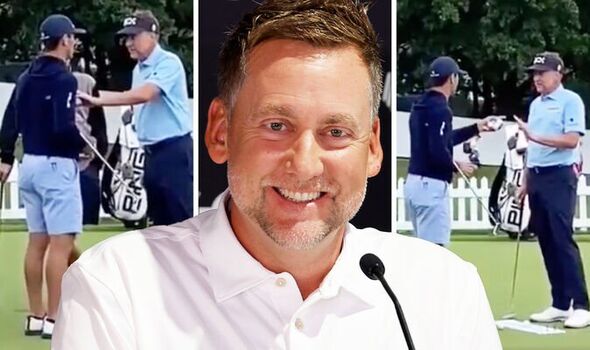 Labelling them ‘hypocrites’, he went on: “They’re pretty hypocritical for coming here and playing outside of LIV when their big goal was spending more time with family and wanting to play less golf.” Soon after his criticism Horschel engaged with LIV star Poulter.

Unsurprisingly rumours began to grow on social media that the duo were locking horns over their differences, but Poulter has since looked to squash those ideas following a post of his own on Saturday morning. Taking the original clip, the Englishman dubbed over a parody conversation of himself and Horschel joking about their outfit clash on the putting green.

Along with the video – that he uploaded to Instagram and Twitter – he wrote: “Don’t always believe what you read or hear in the media,” along with a winking eye emoji, whilst tagging Horschel.

The DP World Tour’s flagship event was postponed late on Thursday following the death of Her Majesty Queen Elizabeth II. The postponement ran through to Friday, before the Tour confirmed that the event would restart on Saturday, consisting of 54 holes following the missed play on day two.

The Masters: Ian Woosnam back at Augusta for 32nd time, just 15 months after back surgery