Australians Marc Leishman and Cameron Smith are fighting to stay in contention for the country’s first Olympics golf medal as a host of players outside the world’s elite stunned the big names at Kasumigaseki Country Club.

Leishman (70) is seven shots shy of world No.161 Sepp Straka (63) after lightning briefly stopped play midway through the afternoon, with the Austrian leading a host of unfancied players upstaging the star-studded Americans. 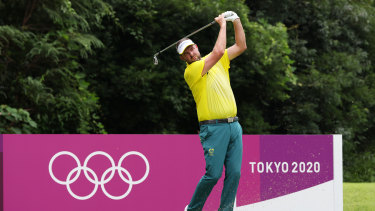 Marc Leishman during his opening round.Credit:Getty

Denmark’s Joachim Hansen, also outside the world’s top 150, rocketed up the leaderboard to join Venezuelan Jhonattan Vegas with a five-under 66.

It left a host of the world’s best players trailing in their wake, including Leishman who battled back from a shaky start to finish at one under. Smith struggled with his driver and carded an even-par 71.

Leishman dropped shots on two of his first three holes before posting three straight birdies on the back nine, clawing his way into a tie for 30th.

‘Every golf tournament you’ve got to be mentally there and not make any silly mistakes, but I think this one it was even more important.’

“Every golf tournament you’ve got to be mentally there and not make any silly mistakes, but I think this one it was even more important because of that top three,” he said.

“I mean they give out three prizes here, so usually if you finish 40th or 20th there’s a big difference in prize money or FedExCup points or whatever it might be. But here you have to finish in that top three.

Said Smith: “Maybe just a bit jetlagged still. Coming from the US just last week probably didn’t help. [I was] pretty solid to be honest. Didn’t hit too many fairways, and there’s so many opportunities out here if you hit fairways. I struggled off the tee and that’s what really hurt me today, I think.” 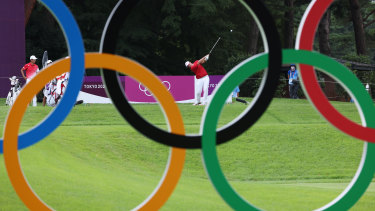 The Open champion Collin Morikawa, the highest-ranked player at the Olympics, finished at two under alongside Ireland’s Rory McIlroy (69), while Justin Thomas (71) also has ground to make up.

Leishman played alongside US Masters champion and hometown hero Hideki Matsuyama, who battled to a two-under 69. It is the first event he has competed in since testing positive for COVID-19.

“If I say there’s no pressure, I would be lying,” Matsuyama said. “Hopefully, I’ll be able to embrace the pressure – that’s upon me to try to put together a nice tournament here.

“It was very difficult playing for the first time after [COVID-19]. Towards the end, my focus kind of faded away. That’s something I need to put together for the rest of the week.

“This experience could be the first and last that I ever get to play in the Olympics in my home country. Hopefully tomorrow I’ll be able to put together a better round.”

World No.1 Jon Rahm and major winner Bryson DeChambeau withdrew from the Olympics earlier this week after contracting the virus, the second time Rahm has tested positive in a matter of months.

DeCheambeau was replaced by Patrick Reed, who only arrived in Tokyo the night before the opening round and quickly found his range to post a three-under 68. The fourth American who qualified for the Olympics, world No.5 Xander Schauffele, is in the mix after joining Reed in a tie for 12th.

Who will win the PGA Championship in 2021? Odds, betting favorites, expert picks & more to know