Sandwich: Louis Oosthuizen is still on track to be a gun-to-tape winner of the Open Championship after a dramatic third round under the breezy blue skies at Royal St George’s and where the only serious changes made on moving day were the top two pulling slightly further away from the pack.

There had been some spectacular scoring in the second round, with 63 players under par and a bunched leaderboard but Ooosthuizen, the winner of the 2010 Open at St Andrews – where he led after each of the final three rounds – held his nerve on the back nine in the third round when averting a run of three bogeys in five holes and will head out in the final pairing with Collin Morikawa of the US on Sunday, local time, at 12 under and with a lead of one shot.

A 10-foot pressure putt at the difficult 15th had kept him in a share of the lead and the popular South African followed it with another 10-footer to make birdie at the 16th, where Morikawa missed his from a similar length, and corrected a wobble that may have been crucial.

“It felt like it was a Sunday afternoon really when I made the putt [on 16] and I was taking the lead,” Ooosthuizen said. “I had a few loose swings before that on my iron shots and needed that little boost and made a really good swing on 16 and a few good ones coming in.”

At different stages of the round he shared the lead with Jordan Spieth and Morikawa, but the 2017 Open champion made bogey on each of the last two holes and finished with a 69 to be nine under then headed straight to the putting green after completing his media commitments. Spieth will be paired with Canada’s Corey Conners, who shot a four-under 66 to be eight under, in the penultimate game.

Morikawa, who had dropped two shots in his front nine and was four off the pace at one point, made four birdies from the seventh, finished at two under for the day and 11 under in total. “Obviously being in a final round at a major is different, but I’m going to try and keep it as similar as possible to every other tournament I’ve played,” said the 2020 US PGA champion. “I don’t have much experience on links golf, and pretty much all the highlights in my head are from this week. Thankfully there [are] quite a few.” 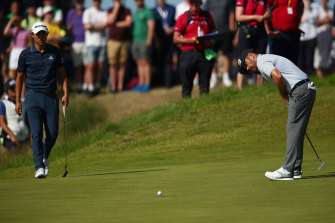 Louis Oosthuizen reacts to a putt on the fifth as Collin Morikawa looks on.Credit:Getty Images

Cameron Smith got off to flier with a birdie at the first and managed to get to seven-under and into fourth place by the seventh but he handed three back thereafter. But he managed a couple more birdies, one of them at the 18th, to put him in good heart for the evening at six under and in tied ninth. The Queenslander feels he is playing well enough to get a low score – “it’s there” – and reckons an eight-under 62 would put pressure on the leaders. Adam Scott had a disappointing afternoon and finished with a 73 for two over par.

Dylan Frittelli only gained his place in the field on Monday, when his fellow South African Louis de Jager tested positive for COVID-19, and he is making the most of his opportunity and sits on seven under alongside Canada’s Mackenzie Hughes and the US Open champion John Rahm in a share of sixth. “If it I can mix it up tomorrow and make a few birdies on the front nine, who knows?” Frittelli said.

Bob MacIntyre, the only Scot in the field, had the best round of the day with a six-birdie 65 that moved him up to four under, eight off the lead, a fine achievement for a man who had to make birdie at the 18th on Friday to make the cut. “I just found some putts that I’ve been waiting on” was the low-key response to moving into a share of 18th place.

Bryson DeChambeau, who had apologised to his club manufacturer, Cobra, after saying that the driver it supplied him “sucks”, was out in the first pairing but only used it once on his front nine though it came out when he got to the 379-yard 12th. The big-hitting American took aim but left his shot about 40 yards short in the rough on the right, amid much cheering from the galleries. From there he chipped on and two-putted for par and though he was eventually around in a two-over 72, he kept the crowd royally entertained.

As for Oosthuizen, he has provided much more of that at the sharp end of this year’s majors and after second-place finishes in the 2021 US PGA and the US Open, to make it six of them all told, he says he is sticking to what has worked for him here.

“I’ll get some physio tonight and probably relax and tomorrow do the same routine and see if I can play a bit better golf than today. You know, finishing second isn’t great, so I will play my heart out tomorrow and see if I can lift the Claret Jug again. I’m going to try and stay awake as long as I can tonight because I know the tee time is probably going to be around 3-3.30pm again.”

AT&T Pebble Beach Pro-Am will go ahead, but without the Pro-Am